Abbotsford –  – For the second straight night, the Winnipeg Wesmen made the UFV Cascades sweat down the stretch, but this time the Cascades fended off the visitors for a 67-59 victory.

On Friday evening at the Envision Financial Athletic Centre, the Cascades had watched a 26-point lead slip away in a 90-88 overtime loss to the Wesmen. Saturday’s rematch played out in eerily similar fashion, as a 21-point UFV lead in the third quarter shrank to five with just over three minutes left in regulation.

The Cascades, though, came through with a gritty effort on defence and on the boards to see the game through. They improved to 2-6, matching the Wesmen’s record in Canada West play.

“A lot of déjà vu, you’d better believe it,” Cascades head coach Adam Friesen said with a wry chuckle afterward. “We’ve seen Winnipeg come back on us too many times in the last little while. But the guys showed a lot of character – we stayed with it defensively, and stayed a lot more disciplined than we have in the past against them. We’re fortunate to earn a victory down the stretch.”

The Cascades came out on fire, building a 21-8 lead after the first quarter behind nine points from Andrew Morris. They maintained the double-digit lead for most of the second, and took a 32-22 cushion into halftime.

UFV forward Mark Johnson heated up in the third quarter, scoring 13 points in the frame and shooting 3-for-3 from beyond the arc. Sagar Dulay also hit a couple of treys in the third – the second of which gave the hosts a 54-33 advantage with three and a half minutes left.

The Wesmen, though, cut the deficit to 60-44 by the end of the third, and continued to chip away with Billy Yaworsky (nine points in the fourth quarter) sparking the offence.

UFV’s offence, meanwhile, nearly dried up – they made just one field goal in the fourth. But after a Narcisse Ambanza free throw cut their lead to 62-57 with just over three minutes left, they came up with five consecutive defensive stops to keep Winnipeg at bay. Dulay came up big at the free throw line in the final minute, going 4-for-4 to salt away the win.

Friesen conceded that the Cascades’ fourth quarter wasn’t pretty, but noted that they were able to keep their turnovers down while getting back in defensive transition and keeping the Wesmen out of the paint in the halfcourt.

“Yesterday, we turned the ball over and did the other two things really poorly,” Friesen said. “Tonight we were better.”

The Cascades were led by fourth-year veterans Johnson (18 points) and Morris (17 points), and both players hauled down nine boards. Sophomore forward Daniel Adediran (11 points, 16 rebounds, three assists) had a huge double-double, and Dulay scored 10 points off the bench.

Ambanza led the Wesmen with 16 points, albeit on 6-of-18 shooting, and Yaworsky had 11 points. UFV limited Winnipeg to 30 per cent shooting from the field, including 5-for-33 (15.2 per cent) from beyond the arc.

“I think today we kind of said, ‘Nope, not again. We’re going to pull it out this time,’” UFV’s Morris said afterward. “It’s obviously nice to get the W.

“We’re a young team, and yesterday was the first time for a lot of the guys seeing that kind of athleticism, that kind of pressure and that kind of intensity. . . . The guys were just composed today. Today we put it all together, and it was fun.”

The Cascades basketball teams are back in action at home next weekend, hosting the UBC Okanagan Heat in a Friday-Saturday set. 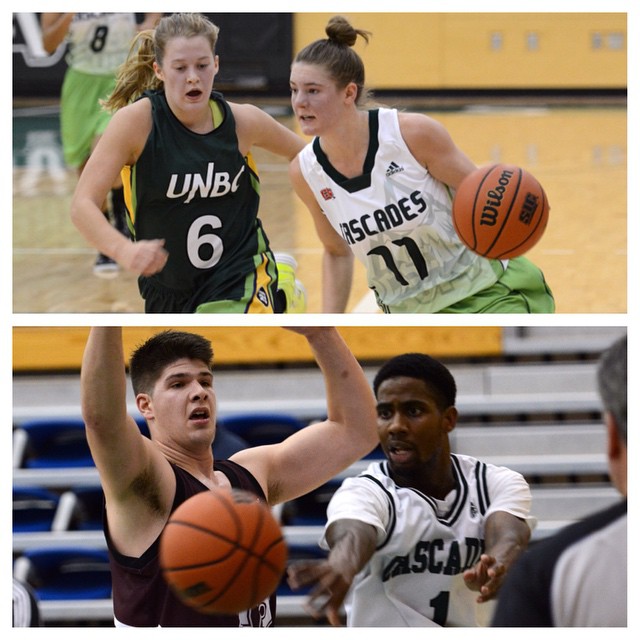 A big third quarter was the difference as the Winnipeg Wesmen defeated the University of the Fraser Valley women’s basketball team 74-60 on Saturday evening at the Envision Financial Athletic Centre.

Winnipeg took a modest 30-24 lead into halftime, but outscored the hosts 26-11 in the third to break the game open. The Cascades came to life offensively in the fourth quarter and whittled a 25-point deficit down to 10, but the Wesmen were able to secure a weekend sweep in Abbotsford.

The Wesmen leveled their record to 4-4 in Canada West conference play, while the Cascades fell to 2-6.

Winnipeg led 14-11 after the first quarter, but UFV opened the second on a 7-2 run, highlighted by triples from Victoria Jacobse and Sara Simovic, to surge ahead. The Wesmen, though, reeled off a 10-0 run of their own, with five points coming from Jessica Dyck, to build a 30-20 lead. The Cascades scored the last four points of the frame to make it 30-24 at the half.

The third quarter was all Winnipeg – they fashioned another 10-0 run midway through the frame, and stretched the lead to 54-29 on a Hezekiah trey at the 2:08 mark. The Cascades made a fourth-quarter push, but the deficit was too much to overcome.

For the Wesmen, Robyn Boulanger counted a trio of three-pointers among her 11 points, and Dyck finished with nine points.

The Cascades basketball teams are back in action at home next weekend, hosting the UBC Okanagan Heat in a Friday-Saturday set.

The University of the Fraser Valley men’s volleyball team defeated the College of the Rockies Avalanche in a five-set thriller on Saturday afternoon at the Envision Financial Athletic Centre.

The Cascades had a strong start, taking the first set 25-14, but the Avalanche came back to win the second 25-19. They continued to alternate sets from there – UFV took the third 25-20, and COTR surged ahead late in the fourth to take it 25-22. The fifth set was all Cascades, though, as they closed out the match by a 15-5 score.

The Cascades improved to 4-5, good for fourth in the PACWEST, while the fifth-place Avalanche fell to 4-7. The two programs clash again on Sunday at Abbotsford Senior Secondary (women 11 a.m., men 1 p.m.).

“We were inconsistent, but our serving game was pretty strong,” Cascades head coach Kyle Donen said. “We were good offensively when we needed to be, but we had some lapses, and we needed to be more consistent.

“At times we had a lot of energy, and then it went away. The opposing team is quieter, so I think we were better when we were able to raise our energy up.”

Cascades captain Ben Friesen sparked the Cascades midway through the first set, putting together a service run to give his team a 16-9 lead. Rookie outside hitter Landon Uy came in off the bench to help the hosts finish off a 25-14 win.

After the Avalanche claimed the second set, fifth-year UFV left side Nick Bruce helped swing the third set the Cascades’ way with some key blocks and kills in the early going. Sophomore right side Graeme Hughes finished it off with a huge kill for the winning point.

UFV looked to be in control in the fourth, up 8-3, but the Avalanche rallied to tie it at 17. With the match all square at 21-21, COTR scored four of the last five points to extend the match.

The Cascades scored the first three points of the fifth set and were off to the races from there, with setter Adam Frederickson punctuating the victory with a block.

Friesen paced the offence with 13 kills, and Bruce chipped in with eight. Hughes had a solid night at the service line, registering two aces.

The University of the Fraser Valley women’s volleyball team got back on the winning track with a four-set triumph over the College of the Rockies Avalanche on Saturday afternoon at the Envision Financial Athletic Centre.

The Cascades are now 6-3 in PACWEST play while leaving the Avalanche at 4-7. The two programs will face off again Sunday at Abbotsford Senior Secondary (women 11 a.m., men 1 p.m.).

“We were very tight,” Cascades head coach Mike Gilray said. “We’ve got a game plan that we know we want to do but weren’t doing, and usually when that happens it’s because we’re not relaxed.

“We weren’t putting the ball where we wanted to put it and it lost us some points, but we had some changes going into the third including Chelsea Kidd being subbed in. She had a calm nature and a great swing, with 10 digs which really helped us. We struggled to pass, but they (COTR) made more errors, and we came out on top.”

Neither team could gain much separation in the first set. The Cascades’ Amanda Matsui reeled off a four-point serving streak to give her team a 20-18 lead, and fellow left side Kim Bauder had a kill and an ace in the late stages to deliver the 25-23 win.

The second set started with a similar momentum for UFV, but a few missed passes let the Avalanche jump ahead 12-8, and the visitors were able to finish off the set from there.

Kidd, Bauder and middle Hanna Hieltjes were among the offensive contributors as the Cascades built a six-point edge en route to victory in the third. Bauder served UFV to a quick 7-3 lead in the fourth, and Hieltjes followed with a service run of her own to stretch it to 14-4. Rookie right side Alexis Edwards had some solid offensive contributions in the fourth, while on the other side of the net, the Avalanche struggled with errors.

Bauder led the offence with nine kills, and right side Cassidy Pearson posted eight kills without an error. Setter Kara Williams had three blocks, and Matsui racked up five aces.