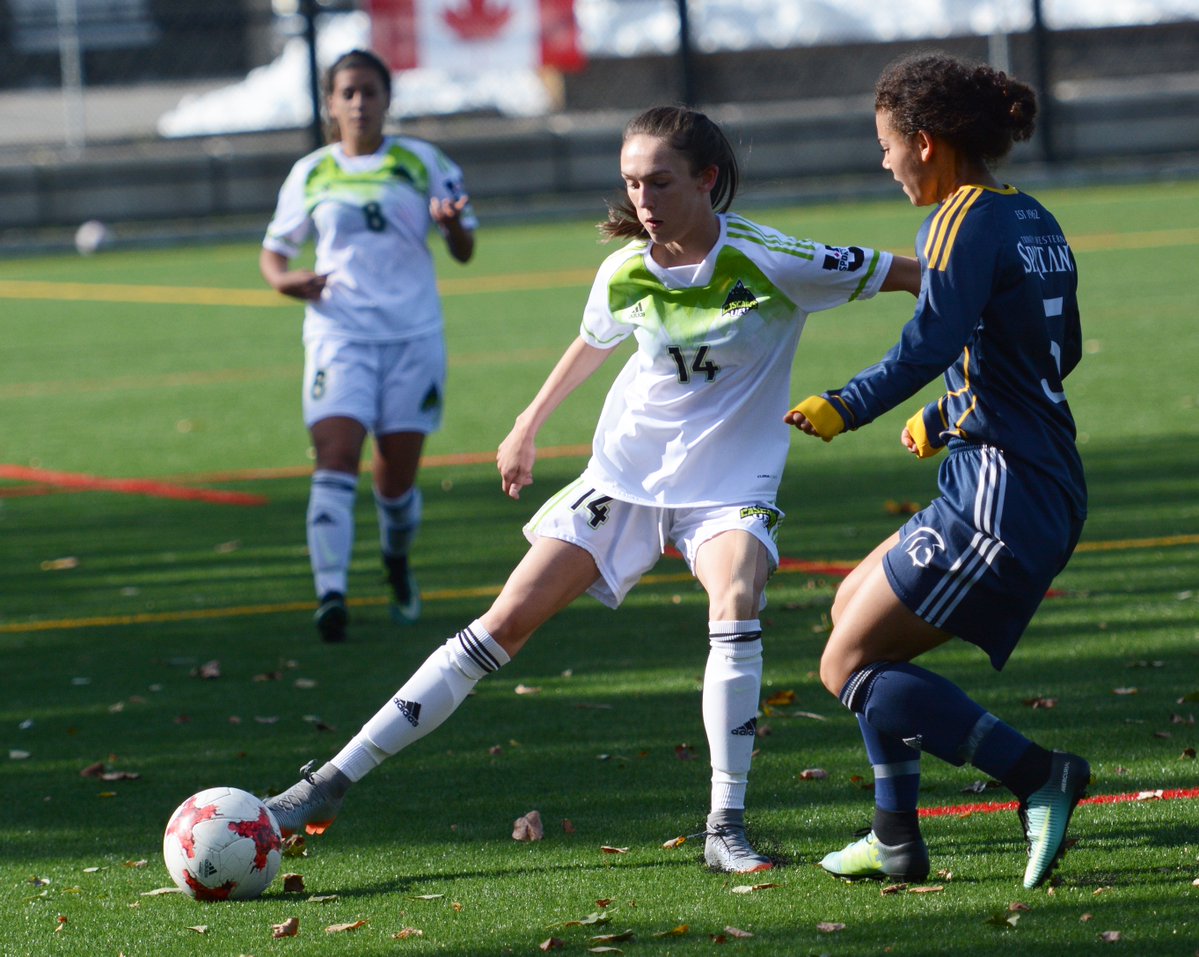 For the second time in three days, a second-half offensive outburst carried the Trinity Western Spartans past the University of the Fraser Valley Cascades in Canada West women’s soccer action.

On Friday evening in Langley, the Spartans had scored four times after the break en route to a 5-0 triumph over the Cascades. In Sunday afternoon’s rematch at MRC Sports Complex, after an evenly contested first half, TWU once again struck four times over the final 45 minutes to pull away for a 4-0 win.

Amy Gartke, Rachel Hutchinson, Seina Kashima and Danae Derksen scored for the Spartans, who improved to 8-2-0 and leapfrogged the UBC Thunderbirds and Victoria Vikes to seize first place in the Pacific Division. The fifth-place Cascades fell to 4-4-2.

“I thought in the first half, we competed really well,” Cascades head coach Rob Giesbrecht said. “We were far more confident than we were the other night – leaked a few chances, but Emily (Harold, Cascades goalkeeper), when called upon, made a couple good saves. We played with confidence, and we were excited.

“Then that first goal they got kind of took the wind out of the sails for some of us. We’ve got to be mentally stronger. We’ve got to face adversity with more belief in ourselves.”

In the first half, both teams had promising forays but few outstanding scoring chances were generated. In the 18th minute, UFV’s Janelle Henke found some room down the right side, but her shot went over the net. Later on, TWU’s Danae Derksen had a clean look at goal from just inside the box, but Harold dove to her right to make the save.

After the break, the Spartans found traction. Gartke opened the scoring in the 52nd minute, volleying the ball home off Danielle Thune’s cross. Then in the 58th, Hutchinson ran onto a pass from Kashima and slotted a low shot past Harold. In the 64th, the roles were reversed – Hutchinson’s initial shot was stopped by Harold, but the rebound landed on Kashima’s boot for an easy finish. Derksen rounded out the scoring in the 69th, deflecting Hutchinson’s corner into the top of the net from close range.

“We need to know that 1-0 down, we’re not defeated,” Giesbrecht said. “We were very soft after that. The first goal was a nice goal that they scored, but we really gifted them the other goals, I thought. The corner, the penetrating passes, they’re things we can easily correct. But you’ve got to buckle down, and we didn’t do that at all.

“When one team loses their confidence, the other team gains more and more. It’s hard, and you can’t let your opponent do that. You’ve got to win that mental battle, and we didn’t do that today.”

The Cascades are at home next weekend, welcoming the Saskatchewan Huskies on Friday and the Regina Cougars on Saturday. The Spartans have the inverse schedule, hosting the Cougars Friday and the Huskies Saturday.

A dramatic injury-time goal from Darash Sandhu lifted the University of the Fraser Valley men’s soccer team to a 2-1 win over the Trinity Western Spartans on Sunday afternoon at MRC Sports Complex.

Sandhu, a rookie forward from Surrey, B.C., picked an opportune moment to cash in his first career Canada West goal. With the score knotted 1-1 beyond the 90th minute, Cascades captain Tammer Byrne sent a long ball ahead and Sandhu and Spartans keeper Sebastian Colyn both raced to meet it. They arrived at virtually the same time, but the ball squirted past Colyn, and Sandhu’s forward momentum gave him a clean look at the vacated net. All that was left to do was slot it home and peel back towards the bench to celebrate with his teammates.

The victory represented a significant bounce-back effort from the Cascades, who had suffered a 4-0 loss to the Spartans at TWU’s Langley campus on Friday evening. It also kept UFV’s playoff hopes alive, boosting their record to 4-6-2 with four regular-season games remaining. The Spartans fell to 6-4-4.

“It’s massive,” Cascades head coach Tom Lowndes said afterward. “Based off how Friday went and how poor I thought we were, fantastic response. I thought first half was probably the best half we’ve put together all year. We were strong in the tackle, defensively our shape was good, we caused problems going forward, and we looked really, really good.

“We came out a little bit flat second half and had to weather the storm, and they did end up getting one. But full credit to the boys for fighting and believing right to the very end.”

The Cascades started much more brightly than they had in Friday’s loss to the Spartans, and their effort yielded a goal in the 12th minute. Gurmaan Jhaj’s initial shot was stopped by Colyn, but the rebound went directly to Brady Weir who tapped it in for his team-best third goal of the season.

TWU started having more success going forward in the minutes leading up to halftime, and they continued that momentum after the break. In the 58th minute, Joel Waterman hammered a shot off the goalpost, and 10 minutes later, Elie Gindo’s header bounced off the crossbar before being cleared out of harm’s way by UFV defender John Kasper.

In the 73rd, the Spartans broke through. Cody Fransen got his head on Leighton Johnson’s corner kick and nodded it home from close range to knot the score.

That set the stage for Sandhu.

“Before the game, I told everyone I was going to get a goal today,” he recounted with a smile afterward. “And I ended up doing it.

“I didn’t even think I’d get to the ball at first, but I just kept running and stuck my leg out, and it hit me and went past him (Colyn). I just shot it right away – maybe everyone thought it was going to go wide or hit the post, but I saw it go in. So I turned around and started celebrating early.”

“I’m happy for Darash,” Lowndes said. “He’s worked hard and had to bide his time for his chance (to play), and obviously taken it. I thought one through 18, it was a full team effort. To see that from everybody just goes to show the type of atmosphere and environment we have and how positive it can be.”

Next weekend, the Cascades visit Prince George, B.C. to face the UNBC Timberwolves. The Spartans are on a bye week before wrapping up the regular season with home games vs. UBC and UVic the following weekend.

The University of the Fraser Valley women’s basketball team, playing its third exhibition game in three days, dropped a 75-62 decision to the Carleton Ravens on Sunday morning.

The game was part of a preseason tournament hosted by the Thompson Rivers WolfPack in Kamloops, B.C.

Facing an opponent which won the Ontario University Athletics (OUA) conference championship and the U SPORTS bronze medal last season, the Cascades showed progress offensively. After shooting 25 per cent from the field in the second half and 43 per cent (13-for-30) from the free throw line in Saturday’s 69-49 loss to the Alberta Pandas, the UFV squad hit 46 per cent of their attempts from the field and 77 per cent (23-for-30) from the charity stripe against the Ravens.

Carleton, though, was more prolific from beyond the arc with nine three-pointers to the Cascades’ one, and they took better care of the ball, winning the turnover battle with just 16 to UFV’s 25.

The Cascades’ veteran stars were in fine form on Sunday. Shayna Litman racked up team-high totals of 18 points and eight rebounds, Taylor Claggett had an ultra-efficient shooting night (17 points on 6-of-7 from the floor and 5-of-6 from the line), and Sara Simovic scored 14 points. Carleton’s Stephanie Carr registered a game-high 19 points.

The Cascades hoopsters open the Canada West regular season on the road vs. the UBC Thunderbirds Oct. 27-28. Home-opening weekend is Nov. 3-4 vs. the Mount Royal Cougars.

The University of the Fraser Valley golf program wrapped up a conference campaign of unprecedented dominance on Sunday, sweeping the PACWEST team and individual championships.

The Cascades hosted the fourth and final PACWEST tournament at Abbotsford’s Ledgeview Golf Club on the weekend, and when it was all said and done, the depth of their hardware haul was simply staggering.

On the team front, the UFV women’s squad put the finishing touches on a title run which saw them finish atop the standings at all four PACWEST tourneys. Their cumulative total of 1,244 strokes was 128 strokes clear of runner-up UBC Okanagan.

On the men’s side, the Cascades trailed their UBC Okanagan counterparts by three strokes heading into the weekend, but made up 22 strokes over the course of Saturday and Sunday’s rounds to win the title by 19 (2,317 to 2,336).

Individually, Daniel Campbell (Bellingham, Wash.) became the first-ever Cascade to win the PACWEST men’s crown, and Emery Bardock (Armstrong, B.C.) won the women’s championship. And their accomplishments were merely the tip of the iceberg for UFV, which accounted for five of the six individual medalists and six of the eight PACWEST all-stars.

The women’s all-star squad featured three players, and all of them were Cascades. Bardock (625 strokes) led the way, followed by Hannah Dirksen (635) and Maddie Kapchinsky (638).

“It went really, really well,” Cascades head coach Chris Bertram enthused, reflecting on his teams’ performances on the weekend. “Our guys team came in here needing to make up a few strokes, and this golf course is a tough one for people who haven’t played it a lot so it was a nice home-course advantage. Our ladies team once again played great – they had their best round of the season on the last day of the season, and hats off to them for a gold medal.”

“We had high hopes going into the fall season, for sure, and we had a bit of adversity in the early going,” Bertram said. “But both teams really stuck together and banded together as a group, and ended up gelling at the right time. I think we got better each and every tournament, and couldn’t be happier to walk out of here with two banners for the gym walls.”

The Cascades will look to continue their momentum at the PING CCAA Golf National Championships, which run Oct. 17-20 at Royal Ashburn Golf Club in Oshawa, Ont.

CHIP SHOTS: Prior to Sunday, no PACWEST program had ever swept the men’s and women’s team and individual titles in the same season . . . The Cascades women’s team won their second straight PACWEST crown, and fourth in five years . . . The UFV men ascended to the top step of the PACWEST podium for the first time since 2014, ending the Camosun Chargers’ two-year run of titles . . . Six conference all-stars by one program in the same season is a PACWEST record . . . Prior to Campbell’s individual title, Cascades male golfers had five second-place overall finishes courtesy Connor O’Dell (2014 and 2015), Aaron Pauls (2012), Mitch Lock (2010) and Jessie Singh (2008) . . . UFV has claimed the PACWEST women’s individual title five straight years via five different athletes, with Bardock being preceded by Sharon Park (2016), Dirksen (2015), Jen Woods (2014) and Dani Shap (2013).