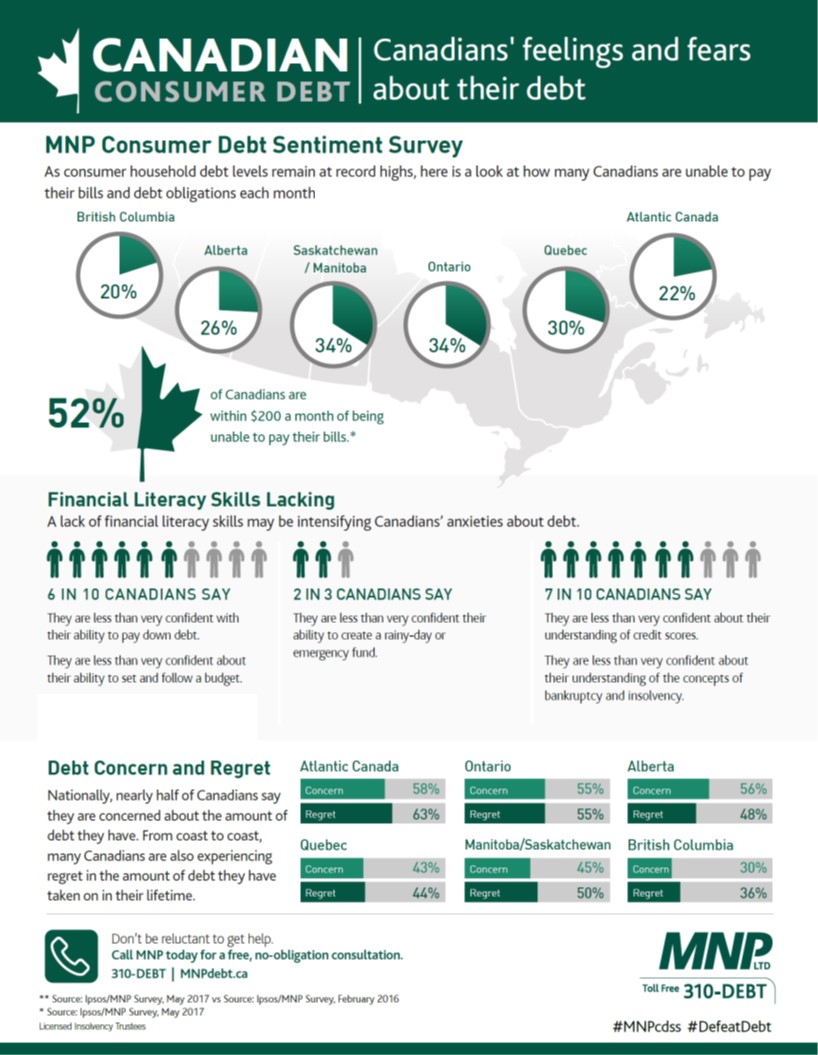 “High home prices and cost of living have British Columbians buried in debt and it is alarming to see that so many lack the basic financial literacy skills to manage the debt,” says Vancouver-based Lana Gilbertson, Licensed Insolvency Trustee at MNP LTD, a division of MNP LLP. “Many are caught on what I call the ‘minimum payment treadmill’, paying only the interest on their debts, and they are just not getting anywhere.”

The survey showed that four in ten British Columbians are now $200 or less per month away from not being able to meet all of their bills or debt obligations each month, including one in five who say they already don’t make enough money to cover them.

“With hardly any wiggle room, any sort of financial shock is going to leave some teetering on financial ruin. With no savings and a lack of understanding of how interest rates impact payments, they end up taking on more debt and high-cost loans. Many feel they can’t get ahead, and have no choice but to be in debt, faced with increased rent prices and the high cost of living,” says Gilbertson.

Four in ten British Columbians say that when it comes to their personal debts, they’d go back and do things differently if they could. Three in ten say they are concerned about how much debt they have. One third of British Columbians expressed regret for the amount of debt they’ve taken on in their life, while nearly a quarter regret the debt they’ve taken on in the past year alone.

“There is an unquestioned attitude that living in debt is normal. Many are in denial, believing they can manage their growing debts. Others don’t know where to go for help or are afraid to address their debts head on,” says Gilbertson. “If you are using credit to pay for basic expenses, or are pulling equity out of your home to service other debts, it’s time to seek the advice of a professional.”

Licensed Insolvency Trustees are the only debt professionals licenced by the federal government and legally authorized to provide services under the Bankruptcy and Insolvency Act.

Other key poll highlights include:

MNP LTD, a division of MNP LLP, is one of the largest personal insolvency practices in Canada. For more than 50 years, our experienced team of Licensed Insolvency Trustees and advisors have been working collaboratively with individuals to help them recover from times of financial distress and regain control of their finances. With more than 200 Canadian offices from coast-to-coast, MNP helps thousands of Canadians each year who are struggling with an overwhelming amount of debt. Visit www.MNPdebt.ca to learn more.

Now in its third wave of tracking, the MNP Consumer Debt Sentiment Survey is a semi-annual poll designed to track Canadians’ feelings about their debt and their perception of their ability to meet their monthly payment obligations.

The survey was conducted by Ipsos on behalf of MNP Debt between March 27 and March 30, 2017. For this survey, a sample of 1,500 Canadians from Ipsos’ online panel was interviewed online. Weighting was then employed to balance demographics to ensure that the sample’s composition reflects that of the adult population according to Census data and to provide results intended to approximate the sample universe. The precision of Ipsos online polls is measured using a credibility interval.  In this case, the poll is accurate to within +/ – 2.9 percentage points, 19 times out of 20, had all Canadian adults been polled. The credibility interval will be wider among subsets of the population. All sample surveys and polls may be subject to other sources of error, including, but not limited to coverage error, and measurement error.