Kayli Sartori and Shayna Litman knew that Sunday’s pivotal playoff clash with the Calgary Dinos would definitely be their last home game with the University of the Fraser Valley women’s basketball program, but they were determined not to let it be their last game, period.

Urged on by a raucous crowd at the Envision Athletic Centre, the two veterans saw to it that the Cascades’ season will live on, sparking a 69-60 victory in Game 3 of their best-of-three first-round Canada West playoff series with the Dinos.

After Calgary cruised to a 67-48 win in Friday’s opener and the Cascades responded with a 61-59 triumph on Saturday, the winner-take-all Game 3 crackled with the physical intensity of a bareknuckle boxing match.

Michal Assaf, the Dinos’ sophomore point guard from Israel, threw most of the haymakers for the visitors. She racked up a team-high 18 points to keep her squad in it, knocking down four of her seven attempts from beyond the arc.

But the Cascades answered with a gritty team-wide defensive effort, limiting the Dinos to 32.8 per cent shooting while hitting 46.0 per cent of their own attempts from the field and winning the rebounding battle 46-33. The latter stat is particularly significant, given that Calgary owned the boards by a combined 107-74 margin over the first two games.

At the offensive end, Litman and Sartori led the way. Litman, a power forward out of Coquitlam, B.C., had perhaps her finest game as a Cascade, racking up 22 points on 9-of-18 shooting to go with 11 rebounds and four assists. Sartori, the All-Canadian from Chilliwack, B.C., stuffed the stat sheet as is her custom, registering 20 points, six assists, five rebounds, two blocks and two steals.

The Cascades move on to the Canada West quarter-finals, where they’ll face the top-seeded Saskatchewan Huskies. Games are set for Thursday (6:30 p.m., all times Central), Friday (6:30 p.m.) and Saturday (2 p.m., if necessary) at the University of Saskatchewan’s Physical Activity Complex.

“Our coach (Al Tuchscherer) always says we play better when our backs are against the wall, and I think that’s totally true,” Litman said. “We weren’t ready to be done. We worked so hard this season, and we have a great group of girls who all want it.

“There was no way that we could leave tonight and not continue our season, not be back at practice tomorrow.”

Richmond, B.C. high school products Bobbi Jo Colburn (R.A. McMath Secondary) and Anmol Mattu (Steveston-London Secondary) opened the game with three-pointers for the Dinos, but the Cascades answered with a Syd Williams triple and a midrange jumper from Litman. The two teams battled back and forth throughout the first quarter, which ended in a 18-18 stalemate.

Litman caught fire in the second, scoring 10 points in the frame, and the hosts led by as many as eight points and were up 35-30 at the break.

Williams sparked the Cascades late in the third, knocking down back-to-back treys to boost the lead to 47-39 heading to the fourth.

UFV continued to make it rain from beyond the arc in the final frame – Sartori and Victoria Jacobse connected from distance early on, sandwiching a tough layup from Assaf, to put the Cascades ahead 53-41. The Dinos responded with a 7-0 run capped by a Brianna Ghali triple, but Litman hit another midrange jumper and a tough layup in traffic, and Sara Simovic swished a dagger three-pointer from the left corner to push the lead back up to 60-48 with 1:05 left in regulation.

Sophomore forward Taylor Claggett had a big night for the Cascades with nine rebounds and eight points, Williams went 3-for-7 from beyond the arc en route to 11 points, and Simovic’s modest stat line (five points, three rebounds, just two turnovers) only hinted at her composure running the offence.

Ghali had 10 points for the Dinos, and Lauren Seabrook posted eight points and eight boards.

Calgary head coach Damian Jennings noted that Litman’s midrange success was a game-changer on Sunday – she’d hit just 33 per cent of her shots from the field in the first two games.

“I’ve been watching Shayna and Kayli for a while now, and I really enjoy the physicality and the way they go about it,” Jennings said. “They’re winners, right? In a three-game series . . . people are going to step up who are winners by nature. Huge amount of respect for them.

“I thought that we competed well in spots, similar to what we did on Friday. It’s just that where we may have held their field goal percentage down Fraser Valley on Friday, we weren’t able to do that.”

The foundation for Litman’s accuracy on Sunday evening was laid on Sunday morning – after the Cascades’ shoot-around, she put in an hour of extra work on her shot.

“Friday-Saturday, I really couldn’t hit a jumper to save my life,” she acknowledged with a chuckle. “I was so tired of feeling this way.

“Today, after we watched some video, I got a few extra shots up that I needed to get up from different spots I like shooting from, and I think that really made the difference. After I hit the first one, it was like, OK, I work on this shot all the time, there’s no reason for me to really be missing them as much as I had been.”

Tuchscherer was pleased with the way his squad of “gamers” came through in the clutch, and marveled at the energy the fans brought to the EAC.

“It was probably the best atmosphere we’ve had in our gym in a real long time, if not ever,” he said. “It was the first game that I can remember where it was hard to communicate with our players on the floor. That was really cool. To see so many other UFV athletes and people from the community out watching us play tonight, it was a great atmosphere and they were a big part of our win, for sure.” 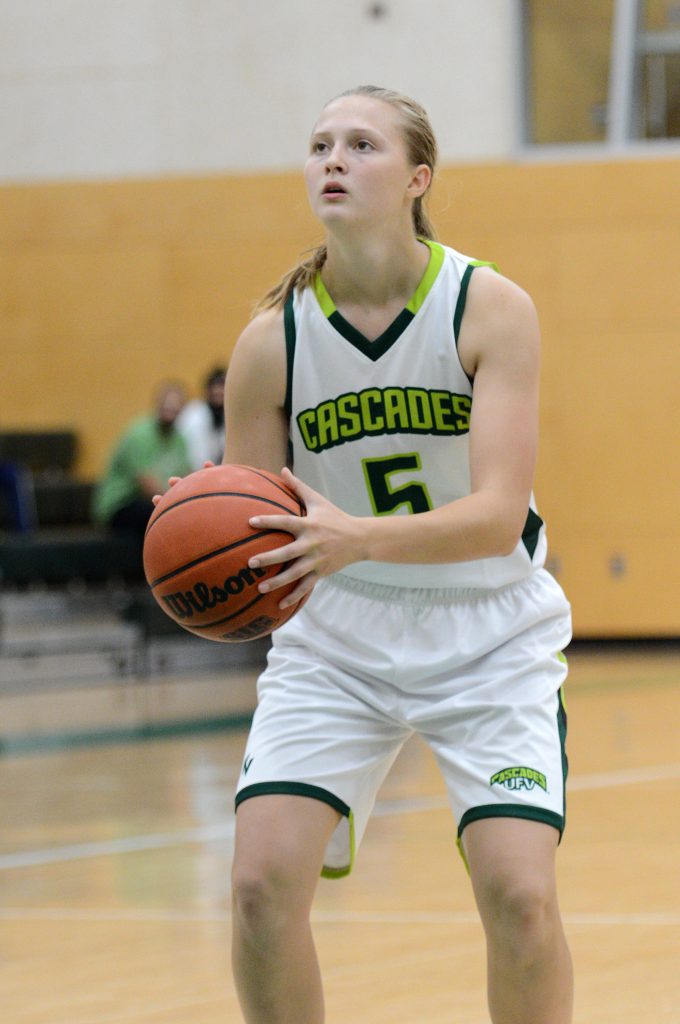