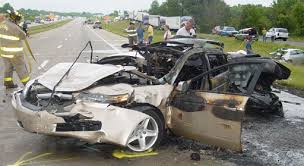 Fraser Valley – There is a new problem with social media and trying to save lives on the side of a road. First responders are dealing with drivers who slow down to take a picture. Sometimes a selfie with the carnage in the background !

It’s bad enough we are notorious for rubber-necking at the best of times, but stopping traffic to take a picture, interfering with EMS crews doing their job or perhaps saving a life, is now a real concern.

RCMP are making a point to let drivers know that by law, this is called “Driving Distracted and IT IS DISRESPECTFUL to the victim that the crews are working on.

Tim Schewe with DriveSmart BC told FVN: If these people stopped their vehicles, took photos in a safe manner and submitted them for money, they might be called reporters! Disrespectful? Perhaps. One should always consider how they would feel if they were the subject of the photo in the circumstances.

A risk at any collision scene are subsequent collisions within the scene caused by drivers who do the unexpected. This can include slowing down to take pictures and not slowing down because you are not interested in the scene and want to get somewhere. No doubt some interesting chain reaction collisions have resulted. Of course, if the crash is into the original scene, everyone is at risk and very vulnerable as many are on foot with no protection. That is often why you find large fire apparatus blocking the scene approach while crews work. The victims are revictimized and the rescuers become victims themselves.

Trying to take pictures while you fail to pay attention to where you are going only compounds the problem. Not only are you taking your focus off of the road, you are deliberately forcing it elsewhere to operate the camera.

Generically, it is distracted driving. Specifically, if you are using a cell phone to take the picture (most would be) it is distracted driving within the meaning of Part 3.1 of the Motor Vehicle Act. If you were using a (single purpose) camera the act would end up being drive without reasonable consideration for others using the highway or the specific offence for whatever you did or failed to do. ie: unsafe lane change.

Either way, it is definitely irresponsible and inconsiderate behaviour. Sadly, it is but one of many examples encountered every day on our highways.