Fraser Valley/Victoria (Inclusion BC) – The Government of B.C. announced an increase in the amount of assets that people receiving disability assistance may hold without losing eligibility for assistance.

Additional changes were also announced, including the way trust payments are handled.

This is welcome news for many people with developmental disabilities and their families, including those who previously had to place inheritances in a non-discretionary trust.

While these announcements are welcome, they fail to address the serious and urgent problem of shamefully low disability benefit rates in B.C, which lag far behind the dramatic increase in cost of living.

BC is well documented as being one of the most expensive provinces in Canada to live in and yet continues to have one of the lowest disability benefit rates. At a rate of $906/month for an individual, the gap between what PWD recipients need and what they receive is growing, and will continue to grow, unless BC changes the way it assists individuals and families with disabilities.

As the Province of BC develops its 2016 budget, Inclusion BC calls for a substantial increase in the Persons with Disabilities (PWD) benefit to reflect the cost of living in this province so that people who rely on benefits are not relegated to living in poverty. 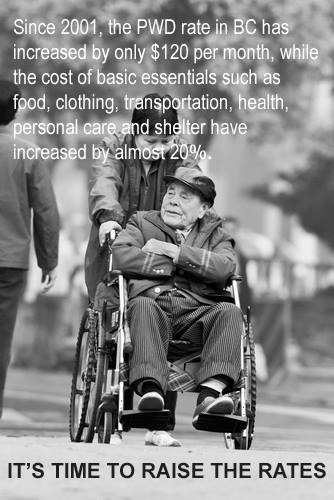 One thought on “PWD – People With Disabilities Allowed More Assets”