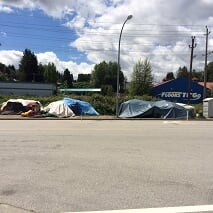 Abbotsford, BC (With files from Abby News) – The City of Abbotsford won’t remove people from the newly expanded Gladys Avenue homeless protest camp.

The site, which has been in place on the southwest side of the road since 2013, spread to more city-owned land across the street last week.

The irony is that the expansion is across the street from the Abbotsford Alano Club (a clean and sober facility that is home to many AA and NA meetings) and the Mennonite Church complex that houses a restaurant, thrift store and social services for seniors and church goers.

“The city has been notified that this is an extension of the protest camp, so we are considering it part of the existing protest,” said Katherine Treloar, the City of Abbotsford spokesperson.

First, because they’re engaging in a political protest, it falls outside the city’s jurisdiction to tell them to leave. Second, the protest directly relates to B.C. Supreme Court case, over whether homeless people can camp on public land in Abbotsford, which has not yet been decided.