Chilliwack/Cultus Lake – The engine of a World War II bomber that crashed in 1945 on Mt. Welch near Chilliwack, B.C. while on a training mission is being returned today to a team of volunteers who intend to make it into a memorial. 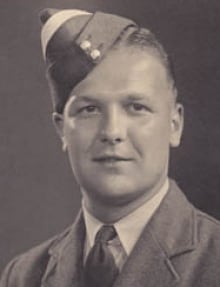 Sergeant James Hammond, aged 20, one of the airmen who was killed in the crash of the Liberator bomber on Mt. Welch near Chilliwack.

On June 1, 1945 the Liberator bomber, far off course and carrying 11 airmen from the UK, crashed into the mountain 30 minutes after take-off killing everyone on board.

After a lengthy two-week search the wreckage was eventually found on the rocky slopes of Mt. Welch just below the summit.

The men were buried where they were, a search team concluding the remains could not be brought out.

“it would be impossible for me to over-emphasize the inaccessibility of the location,” wrote one of the team. “The steep mountain grades, the tangled underbrush, the avalanche snow and the fording of numerous creeks made it impossible to bring out the bodies of the eleven.” 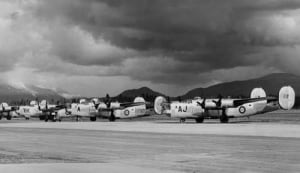 “As you will see from the enclosed photographs, the grave site is indeed a most beautiful spot; it seems literally on top of the world. All the lads were buried together side by side, comrades in death as they had been in life as members of the crew of the fateful Liberator.”

In 1982 the commanding officer of the Air Cadet Squadron in Abbotsford, B.C., Chris Weicht, hiked into the mountains in search of the grave, but numerous landslides had wiped it out. 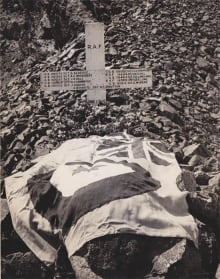 One of the photographs from the mountain gravesite sent to the Hammonds by Padre F.L. Gilbert. This was the standard RAF cross, white with black lettering. (Bamstead History Research Group)

Now volunteers from the Vedder Golden Legion Branch 280, cadets from 147 Airwolf Squadron and others have raised more than $63,000 over the last six years to erect a permanent memorial in Thompson Park just outside of Chilliwack.

They plan to create a memorial that will list the names and pictures of the men.

The group has set up a GoFundme page to raise an additional $42,000 to meet its $105,000 goal, some of which will be used to fly the families of the men lost in the crash to a ceremony planned for Sept. 26, 2015 that will commemorate the 70th anniversary of the end of the Second World War.

On Monday July 13, the volunteers will receive the bomber engine in a special ceremony at Cultus Lake.