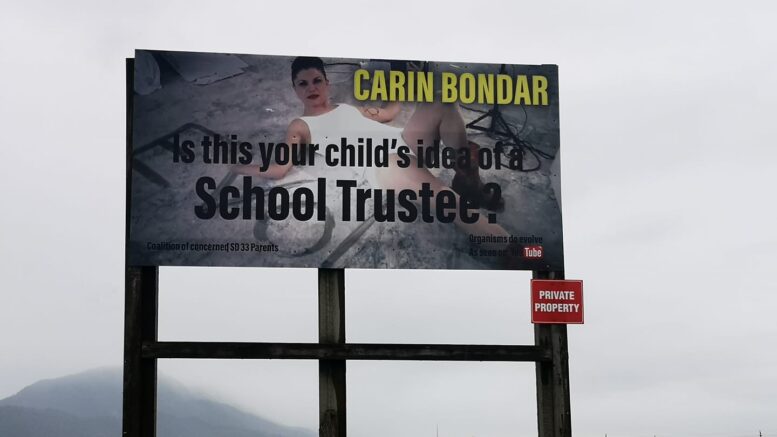 Chilliwack – Thursday morning erupted on social media after a billboard went up on a private farmers field, with a still from a Dr. Carin Bondar video from 2014.

That was a parody of Myley Cyrus’ “Wrecking Ball” called “Organisms Do Evolve”. It was wildly acclaimed as an education video praised by the likes of Discovery Channel, Scientific American and other educational on line tools and resources.

The video has been re-posted as a criticism of Dr.Bondar’s credentials in the upcoming Chilliwack School Board By-election.

The billboard is signed by the Coalition of Concerned SD33 Parents but has not contact or registration information.

It appears the sign was put up undercover of the night. By 10:40AM an FVN reporter drove by on Luckakuck off Young/Chilliwack River Road and a Sheriff’s truck was nearby. When the same reporter drove by again at 11AM, the sign and the Sheriff were gone. FVN has learned that property owners Norman and Natalie Bedard went to the sign and took it down.

chillTV’s Clint Hames commented on Facebook – According the to Elections Financing Act, this billboard falls under the Act Sec. 7 (1) (a) (i) and as such, the “organization” that funded it ” the “Coalition of Concerned (SD33) Parents must follow rules set out by elections BC. https://elections.bc.ca/…/local-advertising-sponsors/

On Thursday evening, before the taping of the chillTV All Candidates meeting (which Adam Suleman withdrew from) Richard Procee released a statement denouncing the tactic:

I became aware today that a billboard was placed along Luckakuck Way.I did not endorse this sign nor did I have any knowledge of its existence until after it was taken down.I am opposed to any form of communication that violates principles of respect, value and dignity.I have spoken with Carin Bondar and assured her that I had no part in the matter.I appeal to all members of our community to conduct ourselves with courtesy and empathy.

From Adam Suleman: This evening I learned that a billboard was set up in Chilliwack to target another candidate running in the school board by-election. My signs are also being repeatedly vandalized. Both actions are completely inappropriate and examples of bullying that must end immediately.

From Brian VanGarderen These acts are not ok. If this was to occur in our school systems it would not be tolerated. Discrimination and harassment are unacceptable in schools and especially in our community. Last night I made my thoughts known during the debate. It is ok to share your beliefs and differences, but it is not acceptable to target someone directly with hate and derogatory speech. The candidates running for school trustee byelection do not deserve to be treated poorly or targeted personally over our unique differences. We are running for trustee to make decisions for our students’ future. When a current board member is worried about what a candidate might bring in, that person needs to seriously look themselves to realize what they are doing is a poor example for the students they represent. We must respect each other, and if there are disagreements, it is important for you to vote for the ideas you support. Let’s lead by example to embody the qualities we want our students to have!

And last weekend, another candidate, Adam Suleman had his signs vandalized and claims racism: This is what happens when a brown man decides to run in a Chilliwack School Board by-election. Most of my signs were vandalized today and I am heartbroken to see that this happened.

Who Will Shine In A TV Election Debate? (..it appears it will be on line only….)