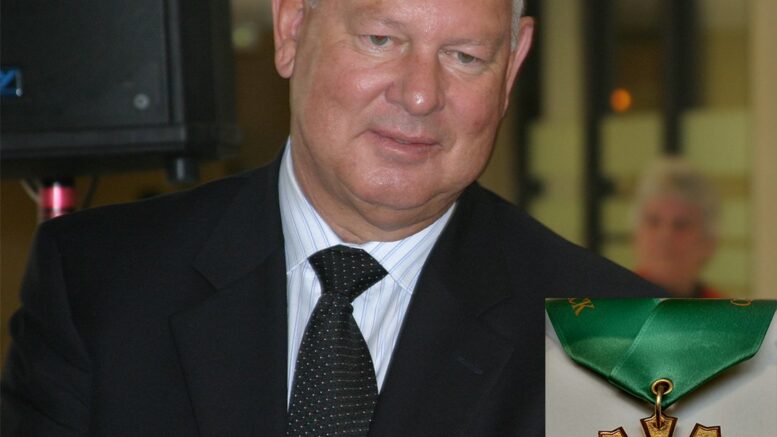 Chilliwack – At the January 19 Chilliwack City Council meeting, the business of the city was set aside for a minute, to praise former Mayor and MLA and BC Minister of Finance John Jansen and give him the Order of Chilliwack for his community service.

Jansen is the sixth recipient of the Order of Chilliwack medal, an award to recognize citizens for outstanding achievement or contribution to our community.

John Jansen is an advocate for education, arts, healthcare, and economic development, and has been actively serving the citizens of Chilliwack for four decades. He has served as Trustee and Treasurer of the Chilliwack General Hospital Board; Chair of the BC Milk Marketing Board; Alderman and Mayor for the City of Chilliwack; Chair of the Fraser-Cheam Regional District; Member of the Legislative Assembly for BC including appointments as Minister of Health, Minister of Finance, and Minister of International Business and Immigration; and more.

“From Canada Education Park to the hospital, and many places in between, you can see the impact of John’s efforts to better our community,” said Mayor Popove. “John has spent years of his life making Chilliwack a better place to work and live, and we are lucky to have such a dedicated individual in our city.”

In both his role as President and as Director of Special Projects for the Chilliwack Economic Partners Corporation, John Jansen played an integral role in Chilliwack’s growth. From attracting new businesses to the city to his work on the purchase of more than 200 acres to create Canada Education Park after the closure of the Canadian Forces Base, John Jansen has helped provide countless local job opportunities and stimulated economic growth in Chilliwack.

The health of the community has often been the forefront of John Jansen’s work, both during his time as Minister of Health, and as President of the Chilliwack Hospital Foundation, through which he has helped raise millions of dollars for Chilliwack General Hospital and to support and expand health services in Chilliwack.

John Jansen has been recognized for his work on many prior occasions. Some of his previous awards include the Queen’s Golden Jubilee Medal, a Paul Harris Fellowship from Rotary International, a fellowship from the General Accountants Association of Canada, and an honorary Doctor of Laws degree from UFV.

The Order of Chilliwack was established in 2001 and is an award granted by Chilliwack City Council to deserving citizens or groups in the community. The purpose of the award is to recognize outstanding achievements or long-term contributions to the community. Previous recipients include the Honourable Steven Point and Dr. Gwen Point, Brian Minter, Fred Bryant, the Chilliwack Rotary Club, and Dorothy Kostrzewa.

The video tribute is at the beginning of the council schedule.

The Honourable Steven Point and Dr. Gwen Point Receive the Order of Chilliwack