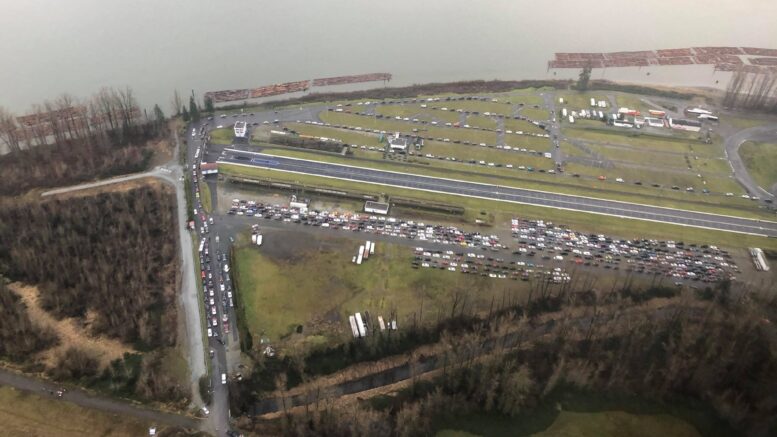 Mission – Mission’s Anti-Bullying rally in support of “Michelle” a trans student and all other victims was held on Sunday.

An emotional day at the Mission raceway with thousands of people waiting to drive by and share some love with the youth who was assaulted at school last week because she is trans.That this is needed is outrageous and intolerable in Canada in 2021. We’ve come a long way to make Canada inclusive for everyone but there is clearly so much more to do. There are too many incidents motivated by hatred in this country – be they over gender identity or expression, or over race, or over sexual orientation, or over indigenous status.

When asked how many people/cars were involved, Yanick told FVN: thousands. They had to block the road off and aren’t letting in any more. There’s also airplanes. 4 of them circling for support. It’s crazy cool!

Carin Bondar, running for trustee with the Chilliwack School Board told FVN: hearing reports of 3,000+.

After the outrage of a video taped bullying incident of a Mission teen, a rally in her honour and to protest bullying in general , is in Mission on Sunday afternoon.

It will start at Staples at Junction Shopping Centre and head in the direction of Mission raceway.

H S Kenny Braich who has been vocal about politics in Mission on Facebook, is partially promoting this. In his Facebook post he thanked Aj Gopinath, Clark Griswold Jahn, the District of Mission , Mission RCMP, Mission Fire Rescue Service and others.

Adam Suleman is a candidate in the upcoming Chilliwack School Board by-election with a background as an educator, mental health advocate, and business analyst.

He released a statement on the assault:

I learned about the upsetting and inappropriate incident that involved bullying at Ecole Heritage Park Middle School in Mission.All school districts have a responsibility to ensure that bullying incidents, such as this one,do not continue. I believe this can be achieved by facilitating programs that foster unity and respect for each other and that focus on improved mental health support for students.

In my eight-year career as a mental health advocate, I have experienced, observed,and learned about the devastating and life-long impacts of bullying on students and their families.As a visible minority, I know how it feels to be singled out due to stereotypes and misunderstandings surrounding people that look like me.

Students should always expect that their personal spaces are respected by their peers, but especially right now with the ongoing COVID-19 pandemic.Those responsible for physically assaulting the student in this incident must be held accountable for their abhorrent actions.I send my thoughts and best wishes for recovery and healing to the student and to their family.