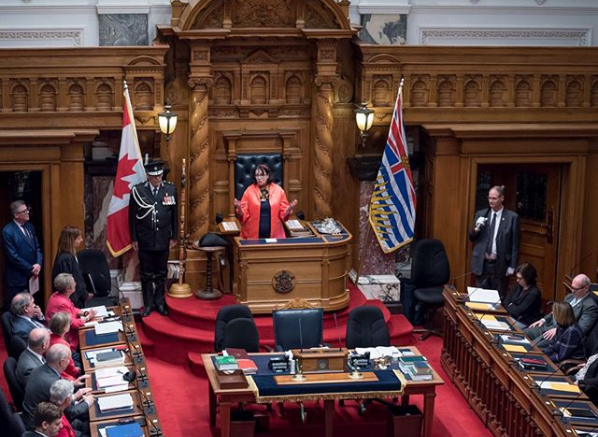 Fraser Valley/Victoria – This week’s Throne Speech was a mere 8 pages, and focused on COVID related economic spending from the speech in the Spring and the upcoming pandemic economy recovery benefit start rolls out on December 18.

Kris Sims with the Canadian Taxpayers Federation stated in a release:

The Canadian Taxpayers Federation is calling on the government of Premier John Horgan to focus on long term tax relief for British Columbians.

“While it’s encouraging to see the government reconvene because MLAs recognize that British Columbians are struggling right now, long term help in the form of tax relief would be best way to make a difference for families and small businesses,” said Kris Sims, B.C. director of the Canadian Taxpayers Federation.

However, other taxes, such as the carbon tax, remain a heavy burden. The carbon tax bill for heating a home with natural gas and using a family sedan to commute is about equal to Horgan’s promised $500 per person COVID relief cheque.

“Horgan did the right thing when he paused the automatic carbon tax hike back in April because it costs everyday people too much money,” said Sims. “He should go one step further and scrap it altogether so he can save people money all year long.”

“The Surrey Board of Trade looks forward to hearing about how the BC Government plans to balance the budget by reimagining the economy beyond the pandemic focusing on new comprehensive actions to support business, revenue growth and industry innovation,” said Anita Huberman, CEO, Surrey Board of Trade.

The $1,000 recovery benefit will be provided on a sliding scale up to an annual family income of $175,000 a year, meaning those who earn more will receive less of the benefit.

The Surrey Board of Trade denotes that the following 10 steps are needed in order to re-imagine governmental support to bolster economic activity:

1. HEALTH CARE
This won’t be the last pandemic or disaster that we face. We need to manage and contain the virus but, at the same time governments can continue to unlock potential in primary care, digital and telehealth sectors to make these services efficient and accessible to all.

3. INTERNATIONAL TRADE & SUPPLY CHAINS
Companies will need to make their supply chains more resilient—for example, by reducing the number of unique parts, building in redundancy across suppliers, near-shoring, and regionalizing supply chains. In addition to securing health equipment and essential food supplies, governments can help companies increase their resilience. At the same time, governments may need to consider the policy implications of remote working in the knowledge economy: as exports of highly skilled services grow.

4. STIMULUS
Stimulus needs to work. Some best practices could include expanding green energy and energy efficiency; accelerating government digitization and offering companies incentives to adopt new technologies; and shaping the workforce of the future to increase resilience in the face of rising automation.

Deliver contactless government. The COVID-19 pandemic has made digital transformation a priority— digital channels have become more important, and citizens and customers increasingly prefer them. Examples of best practices include automating daily data collection from key operators to closely monitor and support decision making about critical food items at risk, as well as the use of “express digitization”— rapid development of automated online platforms.

Manage government balance sheets with an investor mindset. Many countries have applied traditional debt issuance, revenue optimization, and expenditure control to address the immediate challenge, all of which can be further optimized. Over the medium term—one to three years—governments could monetize the assets on their balance sheets, a strategy that represents a largely untapped and potentially greater opportunity to raise additional revenue and reduce deficits.

7. PREPARE FOR THE NEXT CRISIS NOW
Institutionalize best-practice crisis response to prepare for the next crisis. The COVID-19 crisis has pushed many countries to identify and start creating the elements of an effective local outbreak response. Several governments have established crisis nerve centres, enabling coordination of multiple work streams across existing crisis-response structures in government and society for greater response. Establish a plan-ahead crisis unit (for example for an earthquake) —a cross-functional team freed from day-to-day crisis management that looks ahead and considers simulations of various scenarios.

8. DATA & ANALYTICS TO HELP ALL BUSINESSES AND REDUCE CITIZEN INEQUALITIES
Make faster, better decisions using data and analytics. Assemble cross-functional teams to develop analytics solutions for faster responses to changing situations and emerging risks and issues. Next practices might include applying advanced use cases in data and analytics, such as nowcasting—forecasting the near future, present, and even the recent past using frequently measured indicators—to inform policy and decision making.

Partnering with the private sector and multinational institutions to design and implement well-structured stimulus measures, can help government prepare workforces for a technology-focused future and improve the long-term competitiveness and resilience of key industries.

–       The BC recovery benefit will give people some financial help during a hard time while benefiting the local economy.

–       Preparations are underway to ensure that when a vaccine is available, it will be distributed to all British Columbians as quickly and safely as possible, beginning with those most at risk. Provincial Health Officer Dr. Henry is expected to outline the Province’s own distribution plans later this week.

–       New tax measures will reward businesses for hiring and help them grow and become more productive by making it easier for them to invest in equipment and machinery.

–       Fixing roads and bridges and commute times was mentioned; transportation and infrastructure investments to be made

–       Expanding childcare and early learning with millions of dollars

–       Schools will get millions to create more spaces

–       Assistance for reskilling and upskilling the workforce

Horgan was opposed the B.C. carbon tax when he was in opposition, saying it would cost people too much money to heat their homes and to get to work.

Emissions in B.C. have gone up, despite British Columbians paying the highest carbon tax in Canada.

“Emissions have gone up 10 per cent in the past three years, and in five of the last seven years,” said Sims. “It’s time for Horgan to admit he was right about opposing the carbon tax back then, scrap this expensive failure and save people money all year round.”

Be the first to comment on "Business Response to Throne Speech"