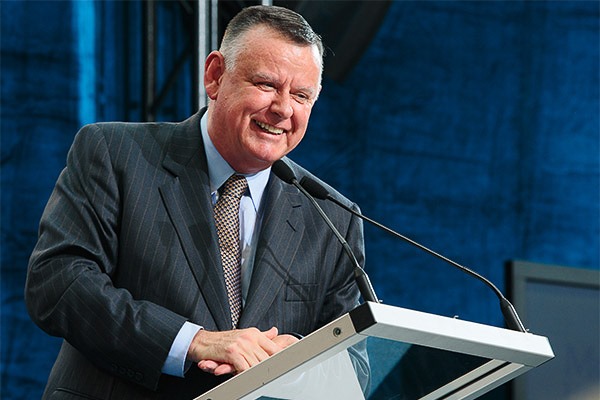 Surrey/Burlington, Ont (Matt Baker – BC Lions) – The BC Lions Football Club is very saddened to announce that our owner and champion David Braley passed away peacefully this morning at his home in Burlington, Ontario.

“We share this news with the heaviest of hearts. David has been a proud and fiercely loyal owner of our team, a champion of the Canadian Football League, and a leader for whom his love of our game and our country went hand in hand and spanned decades.  We share our deepest condolences with his family, friends and admirers,” said Rick LeLacheur, President of the BC Lions Football Club.

“One of his final acts of devotion to Canadian football was a clear expression of his desire that the stability of our club be maintained through a smooth transition following his passing. We will work closely with David’s estate to follow that plan.”

Also owner of the Hamilton Tiger-Cats from 1989 to 1990 and the Toronto Argonauts from 2010 to 2015, Braley served as an Interim Commissioner of the CFL and Chair of its Board of Governors.  He was inducted into the Canadian Football Hall of Fame in 2012.

Braley was a highly successful entrepreneur with a genius for business and a generous philanthropist who made enormous contributions in the arenas of, i health, research and sport, including amateur football. Passionate about politics and public service, he served his country as a Senator from 2010 to 2013. Last year, he was named an officer of the Order of Canada, one of Canada’s highest honours.

“We have lost our greatest champion. All of us associated with the Lions have personally seen, time and time again, David’s selfless commitment to our club and our fans,” LeLacheur.

“But his example and inspiration, along with the direction he provided us all as his health failed, fuels our confidence in the Lions future. The BC Lions will continue to work hard to honour his memory by being the best we can be on the field, in the boardroom and in the community.”

A BC LIONS & CFL GIANT

Mr. Braley first purchased the financially-strapped BC Lions prior to the 1997 season and would be at the helm for one of the Canadian Football League’s most remarkable turnaround stories, both on and off the field.

During his induction speech at the Canadian Football Hall of Fame in 2012, Mr. Braley spoke of how proud he was going from 8,000 fans in the stands at his first game as owner to averaging 35,000 at the highest point of his tenure.

His first Grey Cup win as a CFL owner was a historic one. In 2000, the Lions flipped the switch in November and became the first team in pro football to win a championship despite finishing below .500 in the regular season. The Cinderella run was completed with a 28-26 win over Montreal in the 94th Grey Cup at Calgary’s McMahon Stadium.

Three years later, the golden age of Mr. Braley’s Lions ownership began when he and the late Bobby Ackles successfully lured Wally Buono, the CFL’s most successful head coach, to the Lions from Calgary.

The Lions finished first in the Western Division every year from 2004-2007, posting a regular season record of 52-19-1 in the process. In 2006, the franchise won its’ fifth Grey Cup and second under Mr. Braley’s ownership by taking down the Alouettes yet again, 25-14 in Winnipeg.

He would earn a third in 2011 when the Lions went from an 0-5 start to Grey Cup champions, beating the Winnipeg Blue Bombers in front of our home fans at the newly renovated BC Place. The 2011 Grey Cup festival was also one of the more successful CFL events to date.

Along with the three Grey Cup championships and bringing fans back to the stadium, Mr. Braley’s ownership reign was also known for the Lions becoming major pillars in communities across the entire province. Prior to 2020, the club would visit an average of 140 schools per year.

A former high school player himself, Mr. Braley always believed in promoting the game of football at the grassroots level.

It was then-Hamilton mayor Bob Morrow who urged Mr. Braley to step in and purchase the struggling Hamilton Tiger-Cats in 1989. That was the start of his very successful track record of owning football franchises. The Tiger-Cats would appear in the Grey Cup in his first season as owner and would then return to community ownership prior to the 1992 season.

Mr. Braley also owned the Toronto Argonauts from 2010-2015. The highlight of that tenure was the Argonauts hosting and winning the historic 100th Grey Cup. It was the fourth and final Grey Cup win as a CFL owner.

A well-known leader and innovator, Mr. Braley also spent time as Chairman of the CFL’s Board of Governors and also served as Interim Commissioner from March-November of 2002 before the appointment of Tom Wright.

Mr. Braley’s success in the world of sports wasn’t just limited to the Canadian Football League. He kept soccer alive in the market by purchasing the Vancouver 86ers (A-League) in 1997 and owning them until the year 2000.

He was also a major force in bringing the 2012 World Cycling Championships to Hamilton in 2012 and was involved in Southern Ontario’s successful bid for the 2015 Pan Am Games.

After studying Sciences at McMaster University, Mr. Braley’s success in the business world began with General Motors Acceptance Corporation in Hamilton before he moved on to London Life Insurance.

He then purchased William Orlick Industries (now known as Orlick Industries) in 1969, and over the next several years transformed it from a small business into one of the leading manufactures of aluminum die-cast auto parts. Orlick Industries has also provided jobs for hundreds of workers in the Hamilton area.

Mr. Braley was always known for also being a champion in the world of Philanthropy, donating over $125 million to various organizations over the years.

During a remarkable ten-month stretch from August 2006 to June 2007, he gave $50 million to McMaster’s medical school and an additional $5 million for the University’s new athletic complex, which is appropriately named the David Braley Athletic Centre.

He also gave $10 million to Hamilton Health Sciences for a new cardiac, vascular and research institute as well as $5 million to St. Joseph’s Healthcare for operating rooms and kidney care.

In 2007, he was presented with an award from the Downtown Vancouver Business Improvement Association for charitable and philanthropic contributions.

Mr. Braley’s long and storied career also included politics. He was appointed to the Canadian Senate by Prime Minister Stephen Harper in May of 2010, and would go on to serve for nearly three years before retiring from government. He received this country’s highest honour, the Order of Canada in 2019

Born in Montreal in 1941, his family moved to Hamilton in 1943. He quickly discovered his true passion for the game of football as a young child when he attended his first Tiger-Cats game at old Ivor Wynne Stadium. Love of the game is what led him to strap on the pads at Westdale High School and of course, carve out nearly three decades of success as an Owner and Governor in the Canadian Football League.