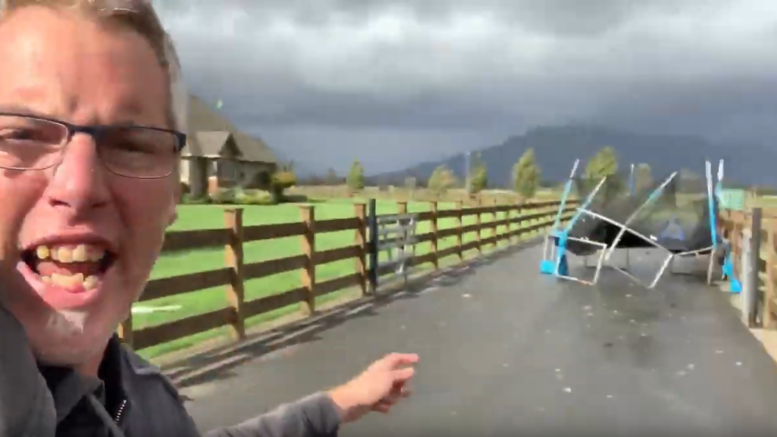 Fraser Valley/ Coquihalla (Shaun Glazier with files from Environment Canada/Abbotsford Weather on Twitter) – Another storm front passed through to give the Fraser Valley a blast of a wind storm and more snow for the Coquihalla. Reports from the Coq claim the winds were “Hurricane Force”.

By 4PM some 26000 residents between Langley and Hope were in the dark although many have power back.

Free lance reporter Shaun Glazier took footage of a tree down off Chilliwack River Road near Knight. Live wires in the bushes as well as a trampoline that was picked up by the wind at Chilliwack Central Road near Prest. Glazier also noted, after talking with some Hydro crews in Chilliwack, that they were “overwhelmed” by the storm and they would be working well into the night.

2020 Starting Off As The Year Of The Wind Storms

Preparing For Snow/Blowing Snow, In The Fraser Valley

Be the first to comment on "“Hurricane Wind” on the Coquihalla – Tress and Branches Down, Thousands in the Dark, Trampoline Took Flight (VIDEO)"