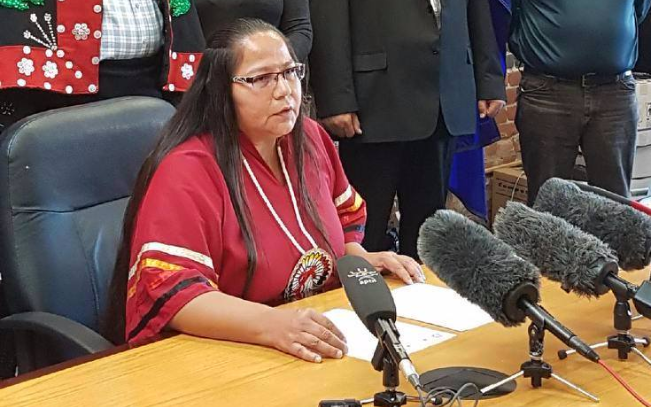 Kukpi7 Judy Wilson of the Union of BC Indian Chiefs/Facebook

Abbotsford/((Xʷməθkʷəy̓əm (Musqueam), Sḵwx̱wú7mesh (Squamish) and səl̓ilwətaʔɬ/sel̓ílwitulh (Tsleil-Waututh)/Vancouver- Regional and national Indigenous organizations are calling for immediate action and accountability in B.C. over the death of a 17 year old First Nation youth in a group home.

Earlier this month an Abbotsford First Nations teen, under the care of a Delegated Aboriginal Agency through a consent custody arrangement, was found dead in the closet of his bedroom in the Agency’s group home. His body had apparently been hanging there for at least four days. On September 14th, staff informed the youth’s mother that her child was AWOL and asked if she had received any communications from him. She informed them she had not, so agency staff proceeded to file a missing person’s report. Four days later, on September 18th, his body was discovered in his closet.

This case has similarities with the 2015 death in youth custody of then 15 year old Nick Lang. His dad, Chilliwack’s Peter Lang wants a full inquiry to this case as was done after his son’s death. The Lang Family pushed for an autopsy, however Nick’s death was ruled inconclusive. Peter said Nick Lang hung himself in his closet. Peter Lang is a local Metis Leader and works with Corrections.

Union of BC Indian Chiefs released a statement which read in part:

Despite the troubling circumstances surrounding the death and repeated requests from the family for a full investigation, the death was immediately deemed a suicide. This was determined without any interviews with the family or further investigation. Abbotsford police and the child coroner assigned to the case quickly determined there were no grounds for further investigation or an autopsy, leading the family to reach out directly for support from First Nation leadership in seeking answers and justice in her son’s death. While an autopsy has now been ordered, only after pressure from First Nations Leadership in BC and nationally, serious concerns remain whether a thorough investigation into his death will be conducted by the and the Abbotsford Police.

Kukpi7 Judy Wilson of the Union of BC Indian Chiefs stated, “The lives of First Nations children deserve the same attention and action as any other child. This young man was in the care of a system that was supposed to protect him, yet his body went unnoticed for several days. The decision of the police to not investigate thoroughly into the circumstances of his death is affirmation of the systemic racism that devalues the lives of Indigenous peoples”

Abby Police Get Another Fake Gun Off The Streets