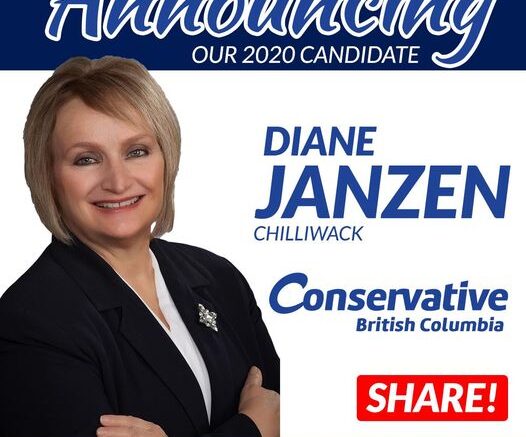 Chilliwack – After Diane Janzen went public with her concerns that the BC Liberals acclaimed all their candidates leading into the Provincial Election, comes the bombshell.

Diane Janzen will run for the Conservative Party of BC in the Chilliwack riding for the October 24th election in the riding of Chilliwack.

Janzen wanted to challenge Martin for the nomination claiming Martin’s lack of a valid track record as MLA.

So far, Martin and Janzen are the only declared candidates.

We are proud to announce Diane Janzen to our team as your candidate for the riding of Chilliwack, British Columbia.Diane is a long-standing resident, active in public service, business and community. Currently the ED of Chilliwack Community Service; Diane oversees $6 million in operations, 105 staff, 500 volunteers, and provides services to close to 7,000 people a year.Diane is extremely excited to represent the riding of Chilliwack and looks forward to meeting with you over the next month.

On Twitter – Diane Janzen Conservative BC for [email protected]