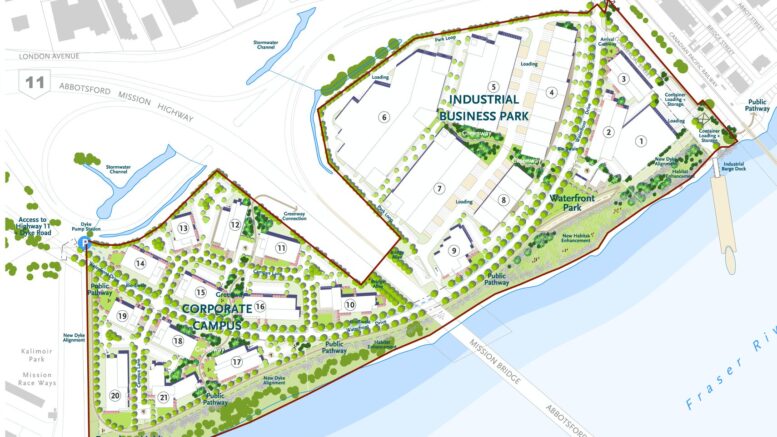 Mission – SEPTEMBER 21 UPDATE – The District of Mission released a statement clarifying what was done during Monday Night’s Council Meeting.

District of Mission Council has approved an amendment to Mission’s Official Community Plan that defines the waterfront comprehensive planning area—a first step that will lead to future area planning guided by input from residents, landowners, businesses and community stakeholders.

Revitalizing Mission’s waterfront has been identified as a priority in the Official Community Plan bylaw with conceptual plans dating back to 1992.

“Developing the waterfront presents many technical challenges, such as flood protection, contaminated land, and water and sewer servicing. This is why we need to work together,” said Mayor Alexis.

During the meeting there was concern over who owned what parcels of land what what could be developed (300 acres of land is in play). To the East of the Mission Abbotsford bridge, would be industrial. To the West would be residential and that would bump up against the property of Mission Raceway. The track when in use, can be revved up to 100 decibels. 60 s the threshold in a residential area.

The third and final reading of a bylaw to add the Waterfront Comprehensive Planning Area designation to the Official Community Plan Bylaw took place at a Special Council Meeting on September 21.

This does not mean that shovels will hit the ground anytime soon. The planning continues. In essence, the District has sent this back to the drawing board for city staff and the players including the Martini Group and the Braich family, who are major players in this.

Follow missionwaterfront.ca to learn more about the waterfront revitalization initiative, the work that’s been done to date, and next steps to advance this initiative.

SEPTEMBER 11 ORIGINAL STORY – In a September 11, 2020 Facebook opinion post, Mission Raceway, already reeling from COVID 19 shutting down their drag racing season, has posted to Facebook, their concerns over the new Mission Waterfront Plans. Track owners are concerned that they are not mentioned in this piece. The future of the track may be in the balance. The NHRA sanctioned track has been in operation as Mission Raceway Park since 1992, however the history goes back more than 40 years.

Here is their statement:

Fans, Racers, Mission Residents We Need Your Help!As many of you have seen or may have heard the city of mission has been proposing a “Waterfront Revitalization Plan” for a while now. This has been put out on social media as well their website and many other local news sources. We feel as though we have been kept in the dark on this plan and after meetings with the city and their Waterfront team we still have very little info and feel like we have not been included whatsoever in all the planning and future of the Mission Waterfront. It has been made fairly obvious by their Posts and plans they have no regard for the continuing operation of Mission Raceway and will be doing their very best to Force us out by building town homes and apartments directly beside the property. For many years we have been told that the Braich Family who owns the property beside us was in favor of the city’s plans for the waterfront leaving us with a tough situation to either fight back or accept the fate put in place by the city. After having a very extensive conversation with the Braich family and seeing the posts made by them on social media as well as the public hearing that they and the Martini Group spoke at we have learned that the Braich family is in fact against the city’s waterfront plans and have had a pending deal in place with the Martini group to develop their property into commercial buildings and warehouses for businesses such as Netflix and a window manufacturing business to operate out of along with many others. This would bring 2000+ jobs to the city of Mission along with large amounts of commercial tax dollars thus lessening the burden on residential taxes. This development would be majorly Beneficial for the city and would also work hand in hand with Mission Raceway allowing us to continue to operate for many years to come. The City of Mission however is not in favor of the Braich’s Proposed development and have been fighting them for the previous 2 years making it difficult for them to move ahead. So needless to say WE DO NOT SUPPORT THE WATERFRONT PLANS! We are asking that all of our supporters reach out to the local counselors as well as SHARE SHARE SHARE and let our voices be heard. We will not go without a fight and after 40+ years of operation in the City of Mission we feel we should be given the respect to continue to operate for many more years!Thank you to everyone who has supported MRP! We greatly appreciate it. The city is meeting again Oct 5 to further discuss the changes to the OCP and the waterfront plans. Here is a link to the mayor and council for the city of Mission as well as their emails!Let them know how much support we have far and wide https://www.mission.ca/municipal-hall/mayor-council/

The District of Mission responded to media requests:

Recent statements on social media regarding the future of Mission’s waterfront area contain misinformation that must be clarified in order to keep residents and stakeholders connected, engaged and up-to-date on the latest information impacting their community.“We take misinformation about the District very seriously,” said Mayor Pam Alexis. “On behalf of Council, we value our relationships with residents and businesses,and hold true to our principles of being open and accountable with the public. We are dedicated to ensuring everyone has the facts they need to be informed about what’s happening in their community.

The complete release is here.

Find out more about the waterfront at www.mission.ca/waterfront

Myth: Waterfront has a Comprehensive Land Use Plan

Fact: Mission’s waterfront does not have a comprehensive land use plan. Statements on social media suggest a comprehensive land use plan for the waterfront is already in place that will restrict industrial land use in favour of residential, this is not true.Council has completed first and second readings of a bylaw to amend Mission’s Official Community Plan to add the Waterfront Comprehensive Planning Area designation to the Official Community Plan Bylaw. Further consideration of the bylaw will take place on Sept. 21.

Myth: The District is adding residential beside the Mission Raceway Park,which will force it to shut down.