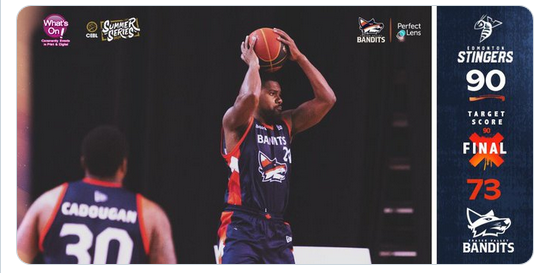 Coming from a 4-16 inaugural season to losing in the CEBL Summer series final is nothing to sneeze at.

The Edmonton Stingers achieved Canadian basketball glory on Sunday, defeating the Fraser Valley Bandits, 90-73, and exercising the demons that lingered with the team after suffering a heartbreaking two-point semifinal defeat to the CEBL’s inaugural season champions, the Saskatchewan Rattlers.

The Stingers entered the game as favourites after finishing the CEBL Summer Series round robin atop the league standings with a 5-1 record, and a returning cast of players from last season. The Bandits arrived with a chip on their shoulder after being labelled by skeptics as too small to compete. Fraser Valley finished the round robin with a 4-2 record and held their own for most of the game, but were outclassed by the Stingers, who emerged as the dominant team in 2020.

“A big part of it was that last year we focused on the goal too much, this year we focused on the process,” Stingers head coach and general manager Jermaine Small said. “Kudos to Kyle (Julius) and his team, they’re a gritty bunch. I said that the biggest thing would be our composure and our poise. We came out the second half and we had that killer instinct. We just put it away and having the MVP doesn’t hurt.”

Reigning CEBL Player of the Year Xavier Moon rose to the challenge and would not be denied a championship. Moon scored 31 points on a stellar 11-of-14 (.786) shooting from the field while also registering five rebounds, two assists and three steals. Moon’s 31 points were the most scored in a CEBL Championship Game and were also the most scored by a CEBL player this season, besting Fraser Valley forward Cameron Forte’s previous high of 30.

For his efforts, Moon was awarded CEBL Championship Finals MVP and is a favourite to repeat as Player of the Year after averaging 19.5 points on .522 shooting from field goal range in eight games played, including both round robin and postseason. It was fitting that Moon stood on the free-throw line with the ball and victory in his hands, reaching the Elam Ending target score of 90 for his champion Stingers.

“It was a tough journey,” Moon said. “The league got a lot better since last year and everybody came to play. We knew we had to come out with that tenacity. We dropped the first game to them (Fraser Valley), so we knew it was going to be a tough task, but everybody handled their business from start to finish and we came out and got this championship.”

The Bandits entered the game fresh off a thrilling comeback on Saturday that saw Fraser Valley turn around a 14-point fourth quarter deficit and inch out a one-point victory, 76-75, over the Hamilton Honey Badgers.

It was Fraser Valley’s third come-from-behind win of the Summer Series. Although an impressive feat, it left skeptics wondering if the Bandits had enough in the tank for one last miracle. Fraser Valley was led by their motivational leader, Junior Cadougan, who contributed a team-high 13 points.

Moon asserted himself early, mixing in an array of floaters, and step-backs to keep the Bandits off balance. Moon was also lethal from three-point distance on the night, connecting on three-of-five of his attempts.

A late triple by Moon in the second quarter helped Edmonton take a four-point lead into halftime. No stranger to trailing at the break, Fraser Valley entered the second half desperate to pull off one last comeback.

With a championship on the line, Jahenns Manigat opened the half with a three-pointer, which brought the Bandits to within a single point. The slim deficit would be as close as Fraser Valley would get; however, as the Stingers absorbed each counterattack and made their run, usually led by Moon.

Edmonton’s returning core rose to the occasion and fought off the Bandits’ last push. Adika Peter-McNeilly drove to the rim, absorbed contact from Kyle Johnson and converted a tough lay-up before nailing a free throw that gave Edmonton a 13-point lead. The Bandits closed the third down nine points but ran out of steam in the final frame.

A 14-1 run by the Stingers in the fourth quarter and timely baskets down the stretch by Peter-McNeilly, Travis Daniels, Brody Clarke and Moon helped solidify a much-deserved victory for the Stingers, who proved that its returning foundation was up to the task of giving Edmonton its first CEBL Championship.

The Bandits entered the fourth down by nine points, but Edmonton outscored Fraser Valley 25-17 in the fourth to pull ahead for good.

“It’s unfortunate that it didn’t end the way we wanted,” Bandits head coach and general manager Kyle Julius said. “I just told the group that I’m extremely proud of them. The work that we put in, the approach. We did everything the right way, throughout the tournament and preparation. We started with our group chats and meetings back in March. I couldn’t be more proud of the group. That’s a special group to me.”

Celebrations ensued immediately as Small’s group stormed the court and surrounded Moon, who took a moment to savour the game-clinching moment before being mobbed by his teammates.

Following an immensely successful CEBL Summer Series that saw the league’s product on and off the court elevate to new heights, fans have much to look forward to as the league begins immediate preparations for its 2021 season.