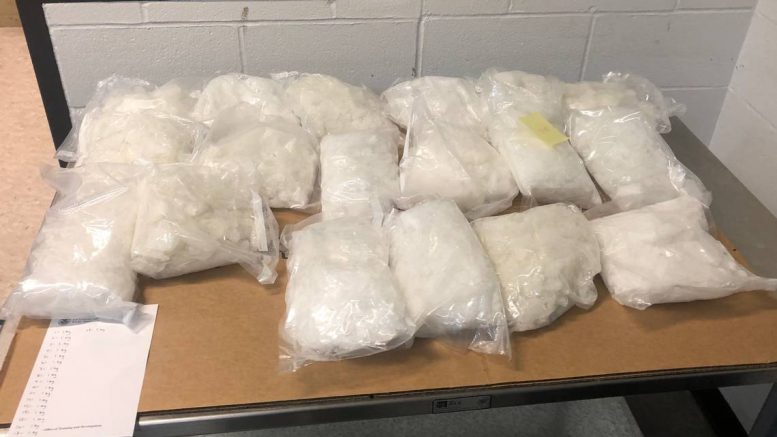 Abbotsford – On July 21, the Public Prosecution Service of Canada laid charges for Importation and Possession of a Methamphetamine for the Purpose of Trafficking against US Citizen Zacchary Marcus Scott Hecock, at the Abbotsford Provincial Court.

On July 20, Hecock, along with a co-conspirator who has been identified but remains at large, had crossed the US-Canada border with an ATV with trailer in the area of Mt. Lehman Road, in Abbotsford. Citizens noticed the illegal crossing and reported it to police.

The RCMP Border Integrity Enforcement Team, Abbotsford Police and US Border Patrol quickly responded to the area. Hecock was arrested in a blueberry field in the area, and the ATV and trailer were secured and seized, as it contained duffle bags with packages of bulk level methamphetamine, totalling a gross weight of 198 kilograms. The Lower Mainland Integrated Police Dog Service also provided assistance in the operation.

Hecock is currently remanded in custody, awaiting his next appearance at the Abbotsford Provincial Court on July 28, 2020. The investigation is ongoing.

During the investigation, one berry farmer, from Mexico on a workers visa, was detained. He and the Mexican Consultant in Vancouver, has since filed a complaint that he was briefly held at gunpoint and assaulted by a police dog. He was treated for injuries at Abbotsford Hospital. RCMP have not commented.

More information on the RCMP Border Integrity Team can be found here.

Drugs, Tobacco Seized At Matsqui Institution – Dropped Off By Drone