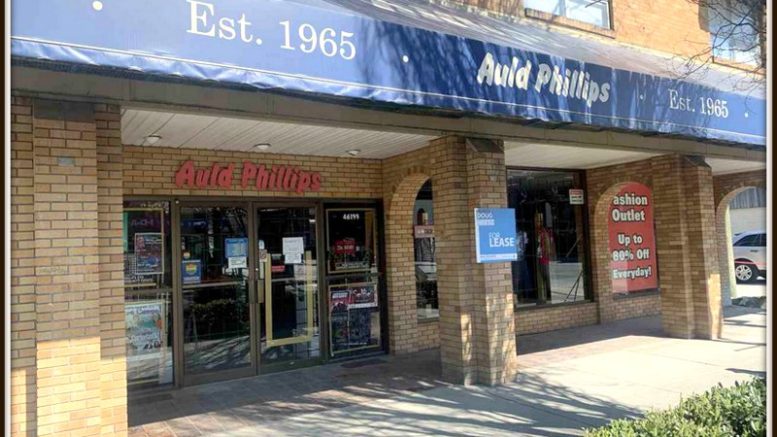 Chilliwack (From the Facebook page Chilliwack History Perspectives) – IMAGES: There are 13 images accompanying this article, each with a detailed narrative.

One of Chilliwack’s oldest and most beloved retail establishments, Auld Phillips, recently shut its doors permanently (JULY 4), much to the dismay of its extensive and loyal female clientele. In fact, both the business and the building in which it operated, the Auld Phillips Block (located just 150 metres east of Five Corners), form an integral part of Chilliwack’s historical shopping landscape and are fondly remembered by multiple generations of Chilliwack families.

The Auld Phillips Block actually predates the Auld Phillips store by over two decades. The man behind construction of the familiar two-storey building was W. R. Gilbert, who arrived in Chilliwack from Winnipeg in 1908. There he and his brothers had been active in retail apparel businesses, and in 1910 Gilbert similarly established “Gilbert Co.” in Chilliwack. This store, on the south side of Yale Road East, across from the Chilliwack Progress building, became a highly profitable apparel and dry goods business for Gilbert.

With his store’s success came the need and the means to expand his operation, and thus Gilbert sought to acquire land downtown upon which he could construct his own building. There was a commercial lot at the northwest corner of Yale Road East and Nowell Street that had been vacant for almost a decade (see Image #2). This real estate, known as the Masonic Lot, was owned by the Ionic Masonic Lodge, and as Chilliwack’s economy and business district continued to grow in the “Roaring Twenties”, it represented a prime location for a commercial structure.

Gilbert quickly concluded negotiations with the Ionic Masonic Lodge and on January 5, 1926, he purchased the vacant lot which featured 66 feet of frontage on Yale Road East (then known as Westminster Avenue) and 120 feet depth on Nowell Street North.

Gilbert planned to build a two-storey brick structure, with two retail units on the main floor – one comprising 5,500 sq. ft. (to be occupied by Gilbert Co.) and the other 960 sq. ft. Similar to the Hart Block and Irwin Block at Five Corners, the building would accommodate a number of three-room residential suites on the upper floor.

Construction of Gilbert’s new building started on January 12, 1926, and he fast-tracked the work such that he was able to relocate his women’s apparel store into its new premises in early April 1926. He also immediately named Chilliwack’s newest downtown commercial structure the “Gilbert Block”.

The other tenant on the main floor of the Gilbert Block, to the west of Gilbert Co., was a grocer named H.A. Young. However, the Safeway chain, eager to open a store in Chilliwack, bought out H. A. Young and took over his existing space in the Gilbert Block, opening its doors on December 10, 1928. Safeway would remain in the Gilbert Block for over six years, prior to relocating to Wellington Avenue in 1935.

In 1929, W. R. Gilbert sold his ladieswear business, Gilbert Co., to Ash Brothers, and moved to Vancouver (he had unsuccessfully run for mayor of Chilliwack in 1928). The Gilbert Co. store continued to be based in the Gilbert Block until 1940, when Lee & Dorland purchased both the Gilbert Co. business and the building, continuing the tradition of women’s apparel at this location (see Image #5).

After the conclusion of World War II, as the community’s social fabric started to return to normal and the economy started to grow, two like-minded Chilliwack businessmen, George Auld and E. M. (Toots) Phillips, met. They would soon pool their resources, experience, and entrepreneurial spirit to launch Chilliwack’s longest-lasting women’s apparel store, Auld Phillips, continuing to be located in the Gilbert Block.

George Auld (1904-1985) arrived in Chilliwack from Saskatchewan in 1918. Upon graduation from Chilliwack High School, he studied to become a teacher, thereafter teaching in Fernie for five years. In 1930, Auld (see Image #3) left the field of teaching and joined the oil industry in Alberta. In 1932 he returned to Chilliwack and the teaching profession, accepting a position at Central School where he taught for the next 13 years, until 1945, when he again gave up teaching, due to what he perceived as low wages. At that time, Auld became sales manager at Gibson’s Auction Barns, where he remained for two years until starting his new women’s apparel venture with Toots Phillips.

In July 1947, George Auld and Toots Phillips, as business partners, purchased both the Lee & Dorland women’s apparel business and the Gilbert Block. The transaction price was $35,000 ($472,000 in today’s dollars) and by agreement they would take over the business and property effective February 1, 1948.

George Auld and Toots Phillips decided to name their new enterprise “Auld-Phillips”. George Auld would serve as general manager of the business, as Toots Phillips, although an equal partner/principal of the new venture, would be otherwise more occupied running his men’s apparel shop 110 metres to the west.

On February 5, 1948, Auld-Phillips (the name would remain hyphenated until 1980) opened for business at 69 Yale Road East, and although not apparent at the time, a long-time staple of Chilliwack’s retail scene had been launched. With the store’s layout improved, along with expanded product lines, Auld Phillips took off (see Images #6 and #7). So popular was the new women’s apparel store that by the early 1950s the Gilbert Block had come to be known as the Auld Phillips Block.

Early on George Auld realized that buying was more important than selling in the women’s apparel business, and he found himself relying increasingly on his wife, Mary, for her expertise with this critical function, and by the end of 1948 she found herself responsible for the purchasing aspect of the business. Several years later, George officially made Mary a partner in the Auld Phillips business.

In 1953, Auld Phillips was continuing to grow and on May 25 of that year the company opened a store at Cultus Lake, adjoining the park grocery store, to sell women’s summer clothes and beachwear. The Cultus Lake Park Board supported the move, agreeing to the short-term lease that expired on Labour Day, less than four months later.

The following year, effective October 15, 1954, Toots Phillips sold his eight-year-old men’s clothing business to Al Jeffrey, who had recently moved with his family to Chilliwack from Regina. Part of the transaction included the stipulation that the store would continue to be known as “E. M. Toots Phillips” for two years, after which it would become Al Jeffrey’s Menswear, which went on to be a downtown Chilliwack haberdashery fixture for four decades.

The sale of his men’s apparel business marked the first step of Toots Phillips’ plans to divest himself of his Chilliwack business interests, prior to leaving the community. In February 1956, George and Mary Auld bought out Toots Phillips’ share of the Auld Phillips business, with Toots Phillips agreeing to allow his name to continue as part of the store and company name. Before long, Toots Phillips relocated to Vancouver and then later to Kamloops.

Also in early 1956, as part of his retirement planning, 53-year-old George Auld sold the Auld Phillips Block to Frank Toews. He took back a 10-year lease for the Auld Phillips business, which was continuing to thrive in downtown Chilliwack.

In early 1964, George and Mary Auld sold the Auld Phillips business to a company headed by Rod Cooper. With retirement, the Aulds planned to do much travelling and play a lot more golf, confident that they had left their beloved business in good hands.

Capitalizing on the evolution of fashion from the conservative 1950s to the modernism of the 1960s, under Rod Cooper’s management, Auld Phillips’ sales increased phenomenally by an average of 25% per year for the seven-year period ended 1972.

Flush with this success, Auld Phillips undertook a three-month renovation in which the two long-time commercial retail units on the main floor of the Auld Phillips Block were consolidated into one, thus increasing Auld Phillips’ space by one third. The complete renovation also included installation of wall-to-wall carpeting, new lighting, and colour-coordinated painting of the store’s various departments. On April 20, 1972, Auld Phillips had a grand reopening and the “new” store was well received by its faithful clientele.

[Note: After Safeway vacated the retail unit to the left (west) of the future Auld Phillips space in 1935, a series of tenants served as neighbours to the different women’s apparel stores for the next 36 years. Initially Coombs Radio Services took over the Safeway space at 65 Yale Road East followed by several small businesses, and then starting in 1943 Coombs Appliances and Heating occupied the space until 1964, when Goodwin’s Electric took over, and then in 1970, it was occupied by Mr. B’s Discount, and then in late 1971, Auld Phillips took over all of the ground-floor space of the Auld Phillips Block.]

Over the years, the Auld Phillips business continued to prosper and grow, expanding its operations as a women’s fashion retailer across Western Canada, operating at one time 58 retail stores under the brand names of Auld Phillips, Suzanne’s, Jenny’s, and Top Shop. By identifying its niche at a point between big-box merchants and small independents, the company located many of its shops in malls in smaller towns such as Salmon Arm, Grand Prairie, etc.

Management of Auld Phillips has been quoted as attributing its long-term success to emphasis on customer service, quality control, and a deep and intimate understanding of the company’s customer base – stressing a strong relationship with its customers. The store identified who their customer was, what she liked to wear, and the budget she had to work with.

However, in early June 2020, Auld Phillips employees in the Chilliwack store were advised that effective July 4, 2020, the original and onetime flagship Auld Phillips store would be closing after 72 years of operation on Yale Road East, at Nowell Street. There was relatively little fanfare regarding the end of this significant, longtime Chilliwack business, with only a brief article in the July 2, 2020, edition of the Chilliwack Progress, along with an earlier advertisement of the store’s “Close-Out Sale” in the paper and similar signage on the windows of the store.

Regarding the future of the 94-year-old Auld Phillips Block itself, prior to the store’s closing at the beginning of July, there were two “For Lease” signs affixed to the structure (see Image #1). The owner is seeking a tenant for a five-year lease, suggesting that with the ongoing redevelopment of Chilliwack’s downtown underway across the street that this is a desirable place to be situated as “this location will be right in the path of all the new shops and restaurants.” Whether the Auld Phillips Block, at 46199 Yale Road, lives to see its 100th birthday in six years’ time or is otherwise redeveloped remains to be seen.

The announcement of the Chilliwack Auld Phillips store’s demise caught its clientele by surprise, and there is a sense of sadness that this dependable presence in downtown Chilliwack is no longer in operation. Many of its loyal customers were drawn to the store by a diverse and appealing product range, favourable pricing, and a wide range of sizes; for many women in Chilliwack, the go-to source for their apparel/fashion needs is now gone.

For 94 years, from when the Gilbert Block first opened in 1926, there has been a women’s clothing store located in the building at the corner of Yale Road East and Nowell Street (with the last 72 years being anchored by Auld Phillips). Regardless of the next tenant to ultimately follow Auld Phillips in occupying the Auld Phillips Block, many Chilliwackians will always associate this space with the Auld Phillips store, and the bond they had with it.

Be the first to comment on "Auld Phillips – Goodbye and Farewell"