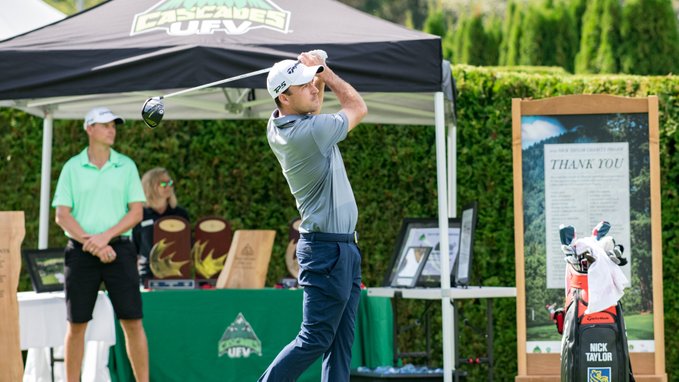 Abbotsford – JUNE 27 UPDATE – Staged in a unique way under unprecedented circumstances, the Nick Taylor Charity Pro-Am was once again a success both on and off the golf course.

Friday’s tournament, held at Ledgeview Golf Club, marked the fourth annual collaboration between Taylor – the two-time PGA Tour winner from Abbotsford – and the University of the Fraser Valley golf program, which organizes the event with significant support from presenting sponsor Algra Bros. Developments.

The tourney is usually staged in September, at the conclusion of Taylor’s PGA Tour season. But with the COVID-19 pandemic delaying the PGA season and pushing the schedule into the fall, the decision was made just over a month ago to host the event on June 26, before Taylor departs Abbotsford to rejoin the PGA Tour.

Recreational golf has weathered the pandemic better than most sports, due to its outdoor environs and the ease of maintaining physical distance between competitors. Nevertheless, this year’s Taylor tourney was reconfigured to limit COVID-19 risks – none of the traditional large group gatherings like dinners were held, and golfers arrived at Ledgeview for tee times, rather than the usual shotgun start.

Taylor, for his part, was thrilled with the generosity of participants. Notably, the right to play with Taylor for Friday’s round was auctioned off, and the winning bid was $15,000.

“I think it went really well. Of any year, this might be the most important year to host an event because of what’s been going on (with COVID-19). People have been shocked and devastated by this in so many different ways. We want to do anything we can to help out the community, and I know the university is going to match some of the funds raised which is great.”

Taylor had won the tournament three of the previous four years, dating back to when it was known as the UFV Cascades Pro-Am. This year, he settled for third place, with Mission pro Kevin Stinson winning the event for the second time. Stinson, the 2015 champion, carded eight birdies on his way to a six-under 64, edging Jake Scarrow (65) and Taylor (66). UFV golf alumni Brett Stewart and Zach Olson tied for fourth at 67 with Luke Bogdan.

Bertram marveled at how quickly the event had come together – the idea to stage it on short notice had been hatched on May 15, as he, Taylor and Algra Bros. partner Phil Algra played a round together at Ledgeview.

“We were at the seventh tee box, and Phil says, ‘I have an idea,” Bertram related with a chuckle.

“Because we weren’t able to have large gatherings before or after the event, it made us rethink how we were going to create an experience within the 18 holes of golf. We got creative, and I think we delivered a really good experience for people. We’ve had lots of laughs on the golf course, good food, good prizes. I think everyone’s walking away happy, and I hope optimistic. Golf is one way we can overcome some of the (COVID-19) stress we’re all experiencing now. I think a lot of people were feeling relief to get out and be a part of something again.

Taylor claimed his second career PGA Tour victory in February at the AT&T Pebble Beach Pro-Am. He returns stateside next week and will rejoin the tour for the Workday Charity Open, July 9-12 in Dublin, Ohio.

JUNE 16 ORIGINAL STORY – The 2020 edition of the Nick Taylor Charity Pro-Am is moving up the calendar, in keeping with these unprecedented times, and will be held in June for the first time.

The fourth annual event, co-hosted by PGA Tour standout Taylor and the University of the Fraser Valley golf program with presenting sponsor Algra Bros. Developments, will be staged on Friday, June 26 at Ledgeview Golf Club.

The event traditionally runs in September, but with the PGA Tour schedule shuffled backward into the fall to work around the COVID-19 pandemic, Taylor will be playing in high-profile tournaments stateside at that time of year. At present, he’s back home in Abbotsford, opening a window to host his namesake charity tourney before his planned return to the PGA Tour in July.

The event is highly anticipated locally, and is moving towards another sell-out this year. As of Monday, June 15, there is still room for several additional teams; for more information, contact UFV golf coach Chris Bertram at Chris.Bertram@ufv.ca or click here to register.

“There’s a lot of moving pieces,” Bertram noted with a chuckle. “The dates we originally had scheduled for this now overlapped with the Tour Championship, so the odds of Nick being able to be back and self-quarantine and participate were low. Since Nick is here until the 28th, we thought we’d go ahead with this. It seems like we’re in a good place right now in terms of safety in the sport of golf, and safety of all of our participants is top of mind.”

As an outdoor sport where physical distancing is relatively easy to maintain, golf courses have been able to remain open in B.C. during the COVID-19 pandemic, with minor modifications. At Ledgeview, contact points have been decreased with bunker rakes and ball washers removed and a new pin/hole system so golfers no longer have to handle the pin. Carts are also sanitized after each use, among other COVID-19 mitigation strategies.

This year’s Nick Taylor Charity Pro-Am will not have any large group gatherings, like the traditional post-round catered dinner, and the event has gone to staggered tee times this year rather than the usual shotgun start to prevent overcrowding.

Bertram expects that the fourth annual Nick Taylor tourney will take the event’s combined fundraising total past the $500,000 mark. Dollars raised go to support the UFV golf program along with charities chosen by Taylor and his wife Andie. This year’s selected charity is the UFV Food Bank, which addresses food insecurity amongst the UFV community.

Nick Taylor is in the midst of his sixth full season on the PGA Tour, and is a two-time winner on the world’s top pro golf circuit, most recently winning the AT&T Pebble Beach Pro-Am in February to secure an exemption into The Masters. He’s currently 21st in the FedEx Cup season standings, 23rd on the PGA Tour money list, and 103rd in the world golf rankings.

A graduate of Abbotsford’s Yale Secondary and a University of Washington alum, Taylor has won his eponymous event twice in three years – including last year when he fired a 64 – and three times overall dating back to when it was known as the UFV Cascades Pro-Am. Other luminaries to have won the tournament include Adam Hadwin (2011, with a tourney-record 62) and James Lepp (2012).