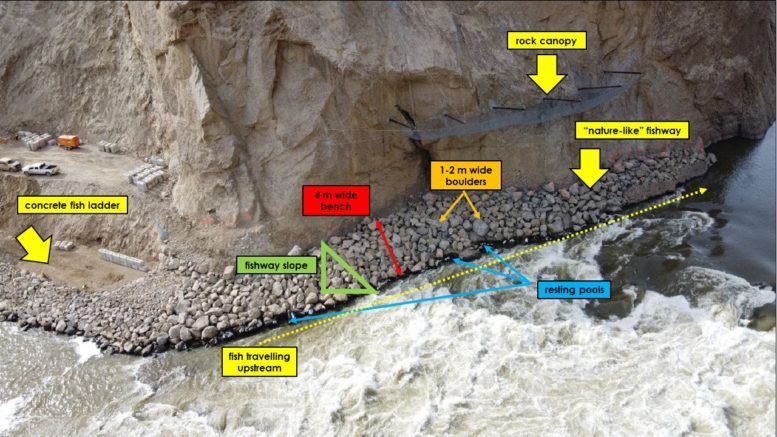 MAY 25 UPDATE – The Whooshh fish ladder, or literally a water cannon to help spawning salmon get around the Big Bar Landslide from 2019, is almost ready.

Over the past 10 days, site preparation continued for the arrival of the pneumatic fish pump system, also known as the Whooshh Passage Portal. The first 2-lane system will be operational in early June, which is later than expected due to significant complexities with installing the mounting hardware that will support the long tubes on the canyon wall.

Fish typically start arriving at the slide site in mid-May. Various species will continue migrating through the area until November, with the sockeye peak migration expected to occur in mid-late August. We are working closely with local First Nations to transport early arrivals 4.5 km upstream until the 2-lane system is operational. A ‘truck and transport’ method will be used with specially designed tanks. This system will also be available in case there are any gaps in Whooshh operation throughout the season.

This recent period also marked another significant milestone on the Big Bar project: the completion of the concrete fish ladder. The ladder will allow fish to swim up to a holding pool where they will either enter the Whooshh Passage Portal or be collected for truck transport. Last week’s information bulletin included a full feature on the concrete fish ladder.

APRIL 24 UPDATE – In their latest report on the Big Bar landslide dated April 24, the DFO said that preparations continued this week for the installation of the pneumatic fish pump system at Big Bar. A contract for the supply of this equipment was awarded to Whooshh Innovations Ltd. The first system is expected to be operational in late May; it will then be replaced by a higher capacity model in late June. The pneumatic pump system will move fish past the slide when water volumes are too high for fish to use the “nature-like” fishway. The current focus remains on constructing the concrete fish ladder, which is being built using 500 interlocking blocks and will guide fish to a holding pool. Site work is also underway to prepare for the installation of the Whooshh tubes that will transport the fish past the slide.

The Province of BC’s River Forecast Centre is predicting that water flows will soon be the highest recorded for the month of April in this portion of the Fraser River. By April 28, flows could reach 5,000 cubic metres per second (cms). Crews are taking every safety precaution as they continue to work on the concrete fish ladder in wet conditions. However, this progress may slow if water levels rise further.

In addition, Kiewit is improving the overland access road for use by trucks to transport fish for upstream release or for delivery to hatcheries.