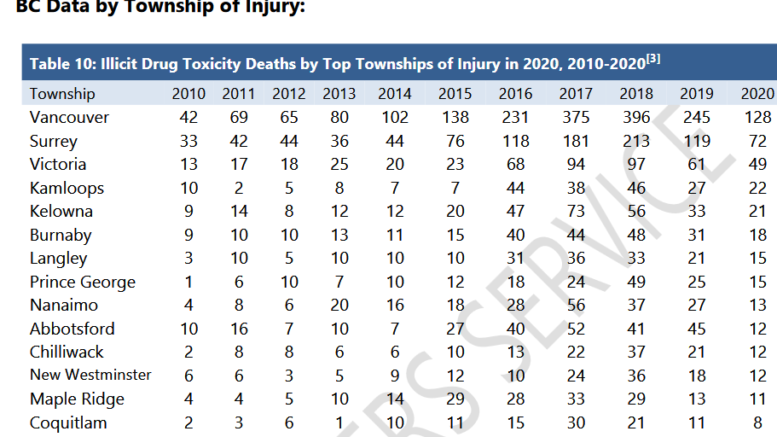 Vancouver/Fraser Valley – The latest BC Coroner report summarizes all unintentional illicit drug toxicity deaths in British Columbia (accidental and undetermined) that occurred between January 1, 2010,and May 31,2020, inclusive.

The May 2020 total represents the highest number of illicit drug toxicity deaths ever recorded in a month in B.C. Once showing promise of a decline, Abbotsford and Chilliwack numbers are swinging back up. In May, Provincial overdose warnings were issued – first for injection drugs and one week later, for smoking hard drugs.

“The number of people who we’ve lost – not this past month, but over the past four years – is unfathomable and heartbreaking,” said Guy Felicella, peer clinical advisor with BC Centre on Substance Use and the provincial Overdose Emergency Response Centre. “More British Columbians died of overdose in one month than died in the whole first wave of COVID-19. All British Columbians should collectively share our grief and urge action to improve access to safer supply so people can get the help they need.”

There have been 554 illicit drug deaths to date in 2020 in British Columbia.

In 2020, 85% of illicit drug toxicity deaths occurred inside (57% in private residences and 28% in other residences including social and supportive housing, SROs, shelters, and hotels and other indoor locations) and 13% occurred outside in vehicles, sidewalks, streets, parks, etc.

No deaths have been reported at supervised consumption or drug overdose prevention sites.

Judy Darcy, Minister of Mental Health and Addictions, has released the following statement about the BC Coroners Service report on monthly illicit drug toxicity deaths for May 2020:

“Last month, a staggering 170 people lost their lives because of an illegal drug supply that’s more toxic and poisoned than ever. This is truly devastating to all of us. The impact of this tremendous loss is felt in communities and families in every corner of our province and in deeply profound ways. Each person was a light to the people in their world and now that light has tragically gone out. We mourn with each and every family of those we have lost to this terrible crisis.

“Before COVID-19, there was so much more to do, but we were heading in the right direction. The overdose death rate was coming down in B.C., and the evidence told us that our collective efforts were making a difference. The rapid scale up and distribution of naloxone and increased access to overdose prevention services (OPS) and treatment showed, through the BC Centre for Disease Control, that we had averted more than 6,000 deaths since the crisis began.

“Yet, with the immense pressure of two public health emergencies, so many unprecedented factors are bearing down swiftly on us all at once. Borders are closed and the usual illegal supply chains are disrupted, leading to drugs that are more toxic than ever. Unemployment, social isolation, declining mental health and increased alcohol and substance use are also the reality for so many right now.

“In the past three months, we have taken significant steps to begin separating people from the even more poisoned and toxic drug supply and protect people who are using alone. By providing safe prescription alternatives, we are saving lives and connecting people to more treatment and health supports.

“Next week, we are launching a 24/7 helpline for prescribers and pharmacists that will provide live, in-the-moment support to doctors, pharmacists and nurse practitioners while they are treating patients with opioid use disorder and considering prescribing safe prescription alternatives to the toxic drug supply.