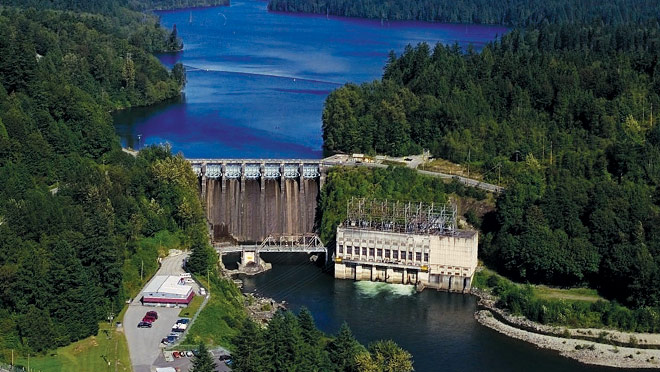 BC Hydro/Ruskin Dam and Powerhouse

An unprecedented drop in power demand due to COVID-19 is forcing BC Hydro to take action to avoid potential flooding risks and impacts on the environment and its infrastructure over the year.

The COVID-19 pandemic has had a significant impact on B.C.’s economy, and the report titled ‘Demand dilemma: How BC Hydro is responding to declining load and operational challenges resulting from COVID-19‘ [PDF, 80.9 KB] finds this has resulted in a nearly 10 per cent drop in electricity demand. Further, with uncertainty around how the province’s economy will recover, electricity demand could decrease by 12 per cent or more* by April 2021 – more than double the decline following the 2008 recession.

The report examines how the drop in power demand coupled with high inflows from spring snowmelt and a limited export market have created a large surplus in BC Hydro’s system. This has created challenges for BC Hydro and the potential for its reservoirs to reach capacity. Further adding to its surplus challenges is the majority of the Independent Power Producers (IPPs) it has agreements with are producing the most amount of energy at this time of year – accounting for about 29 per cent of BC Hydro’s total generation.

BC Hydro’s system is designed and operated to perform safely across a wide range of conditions and extreme events, and its staff are highly trained and experienced to adapt quickly to changing conditions. To ensure the safety of the public, the environment and its system, BC Hydro is taking the following immediate measures:

“The COVID-19 pandemic has created an extraordinary situation with our system that we’re working to address,” said Chris O’Riley, BC Hydro President and CEO. “We’re confident that through these measures, we’ll be able to avoid the public safety and environmental risks that would be created by excessive spilling at our facilities.”