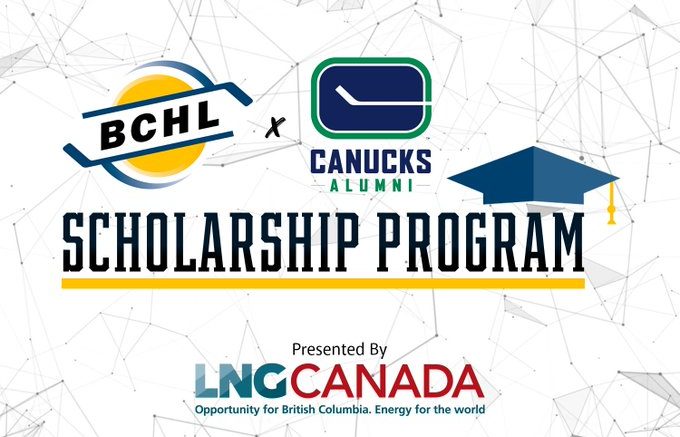 Chilliwack/Vancouver — The BCHL along with the Vancouver Canucks Alumni and LNG Canada are proud to announce a new set of scholarship recipients for the 2019-20 season.

Since 1987, the BCHL and the Canucks Alumni have provided scholarships to players who have graduated from the BCHL with the goal of continuing their academic careers. The recipients of the scholarships are determined by a selection committee from the BCHL and are based on the individual’s academics, hockey and community service.

This year’s recipients are awarded a $2,500 scholarship to a Canadian post-secondary institution.

As part of previously-awarded scholarships, the BCHL and Canucks Alumni will also continue to provide financial support to:

“Not only are our current players important to us, but so are the young men that graduate from our league and go on to do great things in life, whether it’s in hockey or elsewhere,” said BCHL Commissioner Chris Hebb. “This scholarship program is an essential part of us recognizing those former players in the league and helping them achieve their education goals.”

The Canucks Alumni have been providing scholarships to former BCHL players for the past 33 years.

“Led by the Board of Directors and the Scholarship Committee, the Board has always viewed awarding hockey scholarships as one of their primary benefits for the youth of British Columbia  – combining education and athletics with the hopeful goal of developing future business leaders,” said Bob Murray, President of the Vancouver Canucks Alumni.

As one of the league’s Founding Partners, this is the first season that LNG Canada has been involved with the Scholarship Program.

“One of the main reasons we wanted to partner with the BCHL is that their key pillars align with ours and this is a perfect example of that,” said Susannah Pierce, Director of Corporate Affairs for LNG Canada. “Promoting education is of the utmost importance to us and being able to partner with the league and the Canucks Alumni on this scholarship initiative was a great fit.”

Chiefs Bounce Back In Game Three