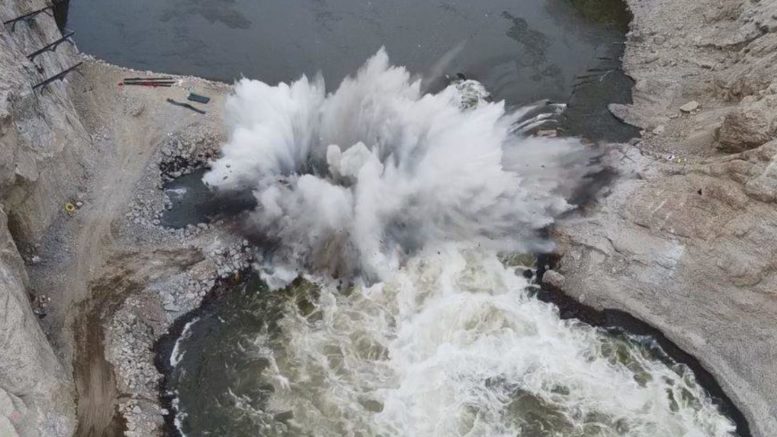 Blasting of boulder M9 occurs at the slide site/DFO

Big Bar/Lillooet – While COVID-19 has our attention, something from last year still has to be addressed. The big bar Slide that stopped Fraser River Salmon from migrating.

This is the March update on the Big Bar Landslide from Fisheries and Oceans Canada:

At this time, the COVID-19 outbreak has not caused significant delays to the work at the Big Bar landslide. Prime contractor Peter Kiewit Sons ULC (Kiewit) is taking additional health and safety precautions, including tightening site access to limit the risk to workers. The landslide response continues to be a top priority with resources remaining dedicated to the work .

Water levels remain low, and with the addition of a swift water rescue night-shift, crews are tackling crucial in-river work around the clock. This week, crews removed additional rock from the river, installed supports for the West Bank canopy, and improved the access route in multiple locations.

Kiewit is also preparing for the second East Toe blast. Crews have detonated charges to create a plateau on the rock outcropping to use as a drilling platform. They will move an air track drill to this shelf by heavy lift helicopter in the coming days. Drilling will then commence, with a blast scheduled in April.

Since mid-January, Kiewit has made steady progress at the site despite challenging weather and difficult access. Although Kiewit has been successful in meeting the winter work objectives, removing large boulders and debris, recent modeling done at low water shows that a mass of slide debris situated elsewhere in the river will cause heavy flows at high water, stopping fish passage.

A team of internal and external experts has been developing contingency plans and designing alternative fish passage systems to move fish during high water, when passage will not be possible for an extended period of time. The plans include constructing a “nature-like” fishway, installing a pneumatic fish lift system, and developing a trap and transport option to collect salmon below the slide and release them up river.

Contingency planning for the enhancement of stocks returning to the upper Fraser watershed is also ongoing. A monitoring program will be implemented throughout the salmon migration period to gather as much information as possible and to aid the implementation of the contingency plans.

DFO project staff met with Chief Roy Fletcher and Coordinator Dennis Fletcher from the High Bar First Nation (HBFN) on March 9, and with Chief Patrick Harry and Coordinator Catlin Duncan from the Stswecem’c Xgat’tem First Nation (SXFN) on March 11 to review the proposed contingency plans. DFO also discussed options and plans with representatives of the Upper Fraser Fisheries Conservation Alliance on March 11. No concerns regarding the proposed methodologies were raised during these discussions. The participants requested regular updates on next steps and their continued involvement as all three levels of government work to reduce the slide’s impact on 2020 salmon returns and beyond.

The response to the Big Bar landslide is collaborative, and teams will continue to work with communities to ensure they remain an integral part of the planning, operations, and decision-making process. Sustained efforts will be required in the short- and long-term, possibly into years ahead, to reduce the impact of the landslide on future salmon stocks.

Fish On The Fraser River At Big Bar To Be Trapped, Tagged, Airlifted, Moved

Be the first to comment on "Big Bar Landslide – While We Worry About COVID, Crews Continue Blasting"