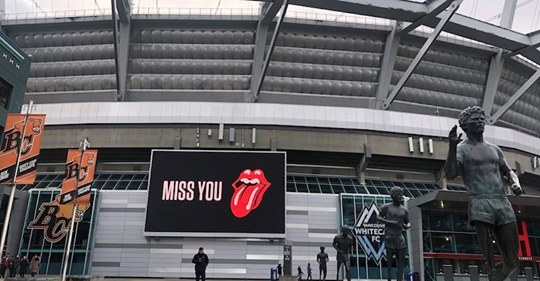 Vancouver (with files from UCR) – Due to COVID-19, the Rolling Stones 2020 No Filter Tour is postponed including the May 12 gig at BC Place in Vancouver. Hold onto tickets as a new date will be announced later in the year.

ORIGINAL STORY – The Rolling Stones are heading back on the road.

The legendary rockers have announced a slew of North American performances throughout 2020, a continuation of their No Filter tour.

The tour WAS to take place:

“It’s always a pleasure to return to North America and play for some of biggest and best crowds in the world!” Mick Jagger said in a statement. Keith Richards added, “We had the best time on the road last summer, and we are ready to do it again!”

Vigilant Rolling Stones fans had seen hints of the tour’s announcement. Earlier this week, a post to the band’s Instagram page noted that the group was “feeling restless.” Meanwhile, cryptic billboards and even an ice sculpture foreshadowed a few of the trek’s stops.

Rolling Stones Start Their 2015 Tour – Vancouver Not On The List