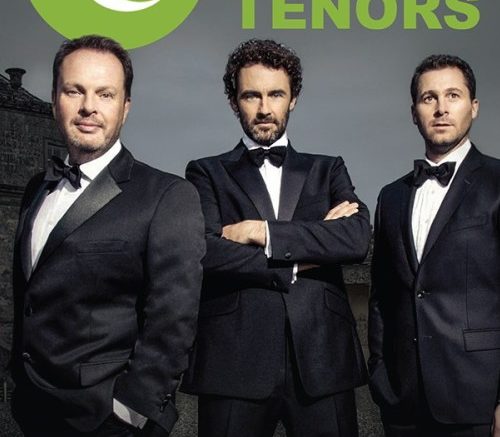 Chilliwack — With bold harmonies and sultry vocals, the charismatic, globe-trotting Celtic Tenors are coming to Chilliwack on March 25. A force on the music scene, this harmony-based trio performs an eclectic mix of music that shows off their amazing flexibility in melding their voices to suit the songs they perform. The Celtic Tenors is an evening that you won’t want to miss as they bring their incredibly magnetic personalities and voices to The Centre!

Over the last two decades, The Celtic Tenors have established themselves as one of Ireland’s most successful international acts. Three of their albums have been certified platinum, and they have sold over a million albums worldwide. Their success has made them the only tenor group with a truly global audience. From playing in a neighbourhood cathedral or major concert halls in international cities like New York, Amsterdam, Sydney or Shanghai, The Celtic Tenors continually give good humoured performances that are sure to keep you mesmerized.

Matthew Gilsenan, James Nelson and Daryl Simpson have performed together as The Celtic Tenors for over fifteen years, and have learned to offer more than their beautiful voices and musical knowledge when performing. They combine the skill, range and ability of world-class tenors, with their incredibly charming personalities and genuine joy for performing.

The Celtic Tenors have broken new ground by stepping away from their classical roots, and adding a more contemporary edge to their performance. From classical and folk to Irish and pop, they have embraced a fresh and invigorating style that has allowed them to welcome a wider audience and won them critical acclaim.

The genuine love they have for what they do shines through in each rendition of beautiful Celtic songs, exhilarating classics, acappelas, and popular songs. You’ll get more than just a musical performance by world-class artists when they come to town, so don’t miss your chance to see The Celtic Tenors in all of their glory.

Be the first to comment on "The Celtic Tenors – Three Tenors, One Celtic Voice! March 25 Chilliwack Cultural Centre"