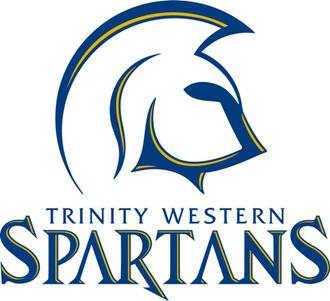 LANGLEY – The Trinity Western men’s volleyball team won their fourth Canada West championship in the last five years, as the Spartans beat visiting Alberta 3-0 (25-21, 25-22, 25-22) in Saturday’s conference final at the Langley Events Centre. The victory capped a championship night for TWU, as the Spartans women’s volleyball team also captured the conference crown with a win over Alberta.

In front of a raucous Spartans home crowd of nearly 1500, TWU, who was playing in the Canada West final for the ninth year in a row, won their fifth conference title in the last decade and sixth in program history.

TWU will now advance to the U SPORTS Championship for the 11th year in a row as they will travel to the University of Manitoba (Mar. 13-15), where the Spartans will be seeking their second straight national title and fourth in the last five years. The Bears will join TWU at the national tournament as one of two earned Canada West berths. The host Manitoba Bisons will round out the Canada West contingent at the U SPORTS Championship.

The Spartans have now earned a Canada West medal in 11 consecutive years.

TWU’s Jesse Elser (Calgary) buried an overpass off a Pearce Eshenko (Banff, Alta.) serve to send the Spartan Faithful and The 300 into delirium, as the home fans celebrated its second championship of the night.

The Spartans Jacob Kern (Edmonton) finished the night with a team-high 10 kills, while Eric Loeppky (Steinbach, Man.) hit .438 with eight kills and just one attacking error to go with four aces and three blocks. Elser also had eight kills. Eshenko finished with a match-high five blocks. Derek Epp (Saskatoon) had a match-high 31 and a team-high five digs.

Braedon Friesen had a match-high 13 kills for Alberta, while Jordan Canham had six kills. Max Elgert had 24 assists. Billy Johnstone had four kills without making a single error and four blocks.

Elgert finished the Canada West playoffs with the third most assists in conference history, collecting 237 over six matches. TWU’s Epp is now just behind Elgert in the record books, sitting fourth after earning 231 assists over six matches.

Elser’s 17 aces in six matches in the Canada West playoffs puts him into a tie with former UBC setter Byron Keturakis for the most aces in a single postseason.

A 6-0 run early in the first set saw the Spartans take a 6-2 lead and they never trailed the rest of the set. The Bears clawed back, eventually evening   set at 14-14, but the visitors were unable to take the lead. The Spartans pulled away as the set progressed and Loeppky earned an ace to give TWU a four-point win. TWU hit .333 as a team, while Alberta hit .179. Loeppky had a team-high four kills, while Friesen had five for Alberta.

The second set was close early on, but a 4-0 run from TWU midway through the set gave the Spartans a 17-11 lead after a Loeppky kill. The Spartans made it 22-15 after a kill from Kern, but Alberta responded and got back within three points after a four-point run of their own. That was as close as the Bears would get, with TWU taking the set by four points after a kill from Epp.

Both teams’ offences improved in the second set, with TWU hitting .500 while the Bears hit .364.

With momentum on the Spartans side and the home crowd in their corner, TWU opened an 11-4 lead in the third set. However, with the game on the line, the Bears battled back and got within two points, closing the gap at 12-10. The Bears hung around, but the Spartans never gave up their lead. Alberta got within one point at 22-21 and then again at 23-22, but a kill from Kern followed by a kill from Elser sealed the win for TWU.

The Spartans took a 6-0 lead in the fifth set and from there, the home side held off the Pandas and rolled to victory as TWU captured its fourth conference title in the last six years. The victory will send the No. 1-ranked Spartans into the 2020 U SPORTS Championship in Calgary as the top seed in the tournament. Alberta is also off to Calgary for the national championship tournament as they will be one of four teams representing Canada West.

TWU, who was hosting the Canada West final for the first time in program history, won the first two sets, but the Pandas roared back to send the match to a fifth set with seven-point wins in both the third and fourth sets. However, it was all Spartans in the final set, as TWU, who was buoyed by a boisterous home crowd, took the title with a decisive fifth-set win.

In the fifth set, TWU hit a whopping .667, with an errorless eight kills on 12 attempts.

Hilary Howe (Calgary), who was recently named a Canada West First Team All-Star, led TWU with 17 kills, while Savannah Purdy (Victoria) had 12 kills and Avery Heppell (Langley), who was a Second Team All-Star, had 10 kills to go with four blocks. Mikaelyn Sych (Airdrie, Alta.) had nine kills and a team-high five blocks. Dora Komlodi (Calgary) had a team-high 38 assists.

Alberta’s Kory White, who was named the Canada West Player of the Year this week, had 29 kills while hitting .365 on 63 attempts. Julia Zonneveld had 13 kills, while Vanessa Jarman had 10 kills and a match-high seven blocks. Jenae Eisler had a match-high 21 digs. Setter Elyse Hart had 53 assists.

TWU will compete in the national tournament for the ninth time in the last 10 years. TWU has also now won a Canada West medal in nine of the last 10 seasons.

The first set went back and forth with both teams showing their offensive strengths as the Spartans hit .310 while the Pandas hit .351. With 11 ties scores and six lead changes in the set, the match went beyond the minimum with Alberta staving off two match points before the Spartans secured the win at 26-24. With the score tied 24-24, a kill from Howe gave TWU its third crack at set point and this time a block from Heppell and Howe gave the Spartans the win.

Howe had seven kills in the set to lead TWU, while White had eight kills without a single error on 15 attempts.

The second set saw the Pandas raced out to a 4-1 lead before quickly extending their advantage to five points, at 7-2. However, the Spartans chipped away at the Alberta lead, tying the set at 10-10. The Pandas went ahead 17-16, but a 5-0 run from TWU gave the home side the lead for good and TWU held on to take the set after an Alberta serving error. The Spartans hit .265 in the set, while Alberta hit .253.

Through two sets, White had 15 kills while Howe led TWU with eight. The Spartans had a 5-2 edge in aces, but Alberta had six blocks to the Spartans four.

Alberta took control of the third set early on, opening a 10-4 lead before grabbing a 16-8 edge at the technical timeout. The teams traded points down the stretch with the Pandas holding off any sort of Spartans surge to force a fourth set with a seven-point win. Alberta found its offensive rhythm, hitting .325 while committing just two attacking errors. TWU hit .206 with five errors.

The fourth set was tight from the outset. Alberta broke the game open just a bit, taking a 13-10 lead, but the Spartans clawed right back, tying the set 14-14. After the technical timeout, the Pandas went back to work, building a 19-16 lead before nabbing a four-point edge, at 21-17. From there, Alberta held off the Spartans, rolling to another seven-point win and forcing a fifth and deciding set. Once again, the Pandas offensive efficiency was the difference, hitting .281 compared the Spartans .111.

In the fifth set, the Spartans pulled away early and never allowed Alberta back in it, with TWU winning the match in emphatic fashion.

Adeleye earned a personal best mark of 12.39m to complete an outstanding 2020 campaign that also saw her capture a gold medal at the Canada West Championships.

Hernandez continued his successful season as he finished second overall with an indoor personal best of 5.08m.

The TWU vaulter capped a silver-medal winning weekend for the Spartans, as the Langley, B.C.-based contingent earned three silver medals, including Praise Olatoke (Glasgow, Scotland) finishing second in the 60m on Thursday.

Fifth-year Nick Colyn (Langley) capped his Spartans indoor career by finishing sixth in the 1500m with a time of 3:56.65.

First-year Ethan Foster (Langley) finished seventh in pole vault with a clearance of 4.58m, while fourth-year Denzel Brown (Port Coquitlam, B.C.) was ninth in triple jump with a mark of 13.94m.

The Spartans men’s 4x200m team, who were once again running without the injured Ben Tjernagel (New Westminster, B.C.), finished eighth with a time of 1:29.38.