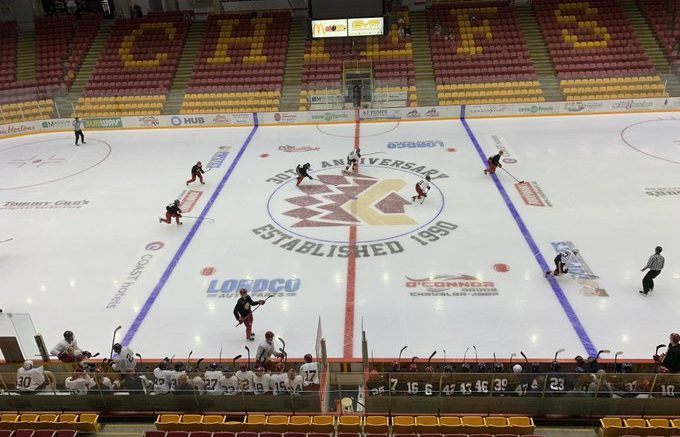 It was another offensive outpouring for the Chiefs on home ice and a gritty, hard defensive game that set the tone for the series.

Kyle Penney opened the scoring at the 8:10 mark of the first period as he spun and fired a shot past goaltender Reece Klassen to make it 1-0 Chilliwack. Twenty-three seconds later Brody Gagno doubled the Chiefs lead to bring the home crowd into a frenzy on the ensuing shift and the Coliseum continued to buzz for the remainder of the evening.

Larson took a penalty with three second remaining in the first period and Eagles went to work on their first power-play of the night. On minute into period two Gabe Schovanek cut the Chilliwack lead in half finishing off a wonderful execution of passes to get Surrey on the board. It was just the fourth power-play goal the Eagles scored against the Chiefs this season in nearly thirty tries. Larson restored the two goal lead for Chilliwack at the 4:26 mark.

Chilliwack went to work on its first power-play of the game shortly thereafter when JJ Fecteau was called for hooking. It just took five seconds for the league’s number one power-play unit to execute. Off a face-off win by Arlo Merritt, the puck came to Cooper Moore who quickly sent it across the ice to Peter Reynolds who blasted home a one-time past Klassen to give Chilliwack a 4-1 lead after two periods of play.

At the 6:17 mark of the third period, Hudson Schandor scored his first of the playoffs to cut the deficit in half for Surrey. Four minutes later the Eagles got to within one goal courtesy of Schovanek who potted his second of the night. On the very next shift Chilliwack got the puck into the attacking zone and a clearing attempt by Klassen was picked up off the right wing wall by Trevor Adams who caught the Eagles netminder going back the wrong way into his goal and fired it into a gaping net to restore the two goal lead for Chilliwack. Larson added an empty netter to seal the deal with a minute and a half to go.

Chilliwack went 1-for-2 on the power-play while Surrey went 1-for-6. The Chiefs outshot the Eagles 38-21 in the game.

You can catch all the play-by-play action with Vanni De Bartolo and Tyler Garrah on Produce Gone Wild Chiefs Playoff Hockey starting with the pre-game show at 6:35pm.

Be the first to comment on "Chiefs Round One, Game One vs Surrey – Chiefs Net 6 To Win (VIDEO)"