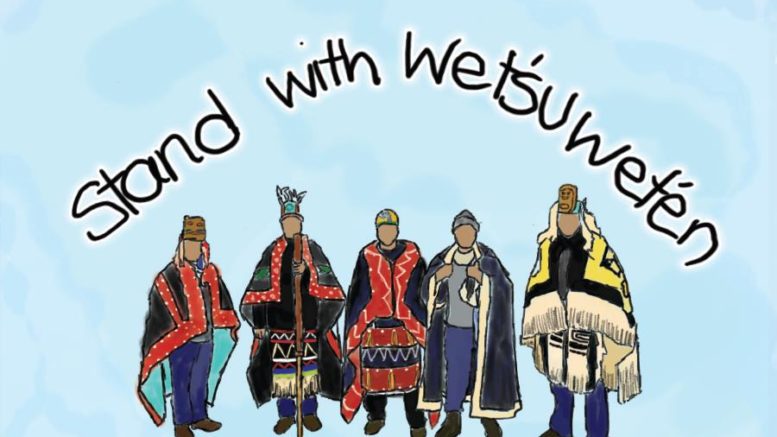 Abbotsford – UPDATE – FVN sent a free lance reporter to the event. The small crowd estimated at 25 to start and quickly dwindled to 2 by 5:30PM. “They were pleasant enough, even offering me a vegan muffin.” Traffic was not blocked by the marchers. Other postings to FVN social media called the march “underwhelming”. The planned Saturday morning march is not happening.

ORIGINAL STORY – On the heels of the national groundswell in support of the Wet’suwet’en concerns, comes another protest that is expected to shut down Abbotsaford’s centre core.

Organized in part by UFV student and contributor to the UFV Cascade Newspaper Darien Johnsen , this show of support is expected to march through downtown Abbotsford between 3-6PM on Friday.

FVN and chillTV reached out to Johnsen for comment, and he does not want to speak to media claiming we (media) are not getting the story right. Johnsen was upset with media claiming that protesters will not “shut down” Abbotsford, however, the title of the Facebook page suggests otherwise.

Last Friday, a similar protest in Chilliwack closed traffic for a few hours along Vedder and Luckakuck along with access to Cottonwood and Chilliwack Malls. That show of support was sponsored by Sto:lo Nation.

On Tuesday in Ottawa, Prime Minister Trudeau convened a meeting of party leaders, excluding Conservative Andrew Scheer, on how to tactfully respond to the various nation wide shut downs. The Conservative Leader made it clear from comments in the House of Commons, that he was not entertaining dialogue, rather that the laws of assemble and interference be enforced.

This is a call to action for allies in the Fraser Valley to stand in solidarity with the Wet’suwet’en hereditary chiefs and Indigenous land defenders at Uni’stot’en camp. This is an ongoing and evolving event and we will be posting updates, so stayed tuned. This is our chance to peacefully protest the RCMP presence on Wet’suwet’en soil.

The event will start Friday the 21st and will continue on Saturday the 22nd. We will be meeting at Jubilee Park at 3pm Friday afternoon and marching through the downtown core. We will then station ourselves at the train tracks (we are not planning to block the tracks, we will just be stationed near them) at Essendene and W. Railway St. We will stay there for as long as we can on Friday night and will regroup Saturday morning at 10am at Jubilee Park and do another march, and again, station ourselves at the train tracks.

We accept that we have much to learn, and we acknowledge the existence of our settler colonial privilege, and we strive to use this to our advantage as best we can to elevate and protect indigenous voices.

Stó:lō Day of Action in Support of Wet’suwet’en (VIDEO)

Joint Statement On Discussions on Wet’suwet’en Rights and Title