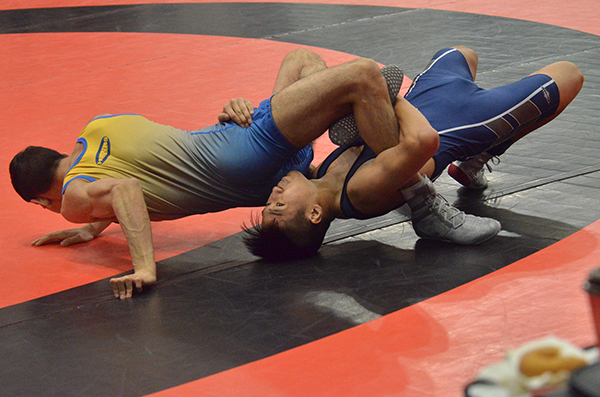 Langley – The Maple Ridge Ramblers were the big winners, taking home a bevy of team and individual prizes while Cowichan’s Talon Hird joined an exclusive list of past champions.

Competing at the 2020 B.C. Secondary School Wrestling Association Championships presented by Onni Group on February 16 and 17 at Langley Events Centre, the Ramblers won the Girls title, the Aggregate team title, the Most Outstanding Female Wrestler Award and the Most Outstanding Female match awards.Hird was victorious in the boys 54 kg division, becoming just the fifth wrestler in the 56-year history of the event to capture five provincial titles.

The Larry Kliparchuk Award (Aggregate champions which has only been presented since 2008) was the first in the history of the Maple Ridge program. Maple Ridge scored 80 points while Alberni District was second with 68 points. Tamanawis did score 80 points as well but the Wildcats did not have enough female wrestlers participating to be eligible for that title.

The Most Outstanding Male match award was the 70 kg final won by Gagan Grewal (Abbotsford Traditional) over Seth Price (Alberni District). It was the second straight gold for Grewal who won in the 60 kg weight class in 2019. Price also jumped two weight classes after winning bronze last year in the 63 kg division.

It was also a historic night for Cowichan’s Talon Hird, who not only became just the fifth wrestler to win a gold medal in each year of high school, but he was also presented the Most Outstanding Male wrestler award.Hird was a dominant force all season, capping off his high school career with gold in the 54 kg weight class over Tamanawis’ Rohit Bal. The last two titles were in the 54 kg class, while the first three were in the 45 kg (Grade 8), 48 kg (Grade 9) and 51 kg (Grade 10) divisions.Hird joins Brad Caulfield (New Westminster, 1969-73), Yorgo Romanis (Alberni District, 1994-98), Harvie Sahota (Rick Hansen, 2004-09) and Isaac Bernard (Guildford Park, 2008-12) in the exclusive club of five-time provincial champions.He also figured should he fulfil that, there might be a strong possibility he would pick up the Most Outstanding Wrestler award.