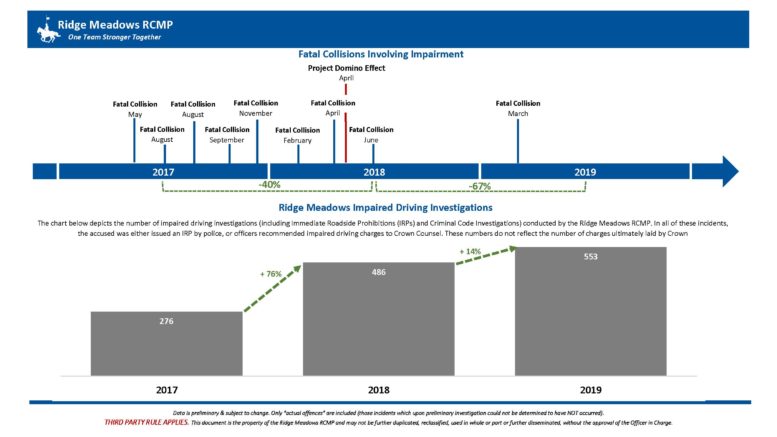 Over an 11 month period (between May of 2017 to April 2018) the Ridge Meadows RCMP investigated 7 fatal motor vehicle collisions where alcohol or drug impairment was a factor.

The Ridge Meadows RCMP Officer in Charge, Superintendent Jennifer Hyland, decided to implement a program that would target impaired drivers and remove them from our roads, making the community safer.  Dubbed “Project Domino Effect,” the initiative focussed police resources to track down and stop the following offences;

In the following 11 month period since the start of Project Domino Effect (from May 2018 to March 2019) police managed to reduce impaired fatal MVI’s down to 2 occurrences.  Additionally, during that subsequent 11 month period (March 2019 to February 2020), there has been zero fatal motor vehicle incidents related to impaired driving.

In spite of this success the work is still not finished.

Of the nine fatal investigations, 4 resulted in criminal charges being approved by Crown Council.