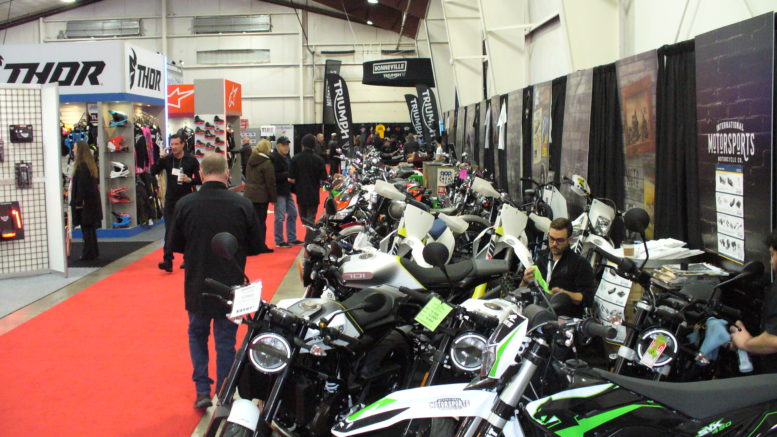 Fraser Valley/Vancouver – UPDATE FEBRUARY 4 – More than 31,000 (31,914) fans came out to Tradex in Abbotsford for the Vancouver Motorcycle Show January 24-26. The annual event—showcasing the latest and greatest motorcycles, ATV’s, scooters and three-wheelers from the industry’s leading manufacturers—lived up to its reputation of being British Columbia’s premier motorcycle show.

“It’s always such a joy to see so many different people from all walks of life at the Vancouver Motorcycle Show,” says Show Manager Laurie Paetz. “Whether they’re from Vancouver, the Fraser Valley, Pacific Northwest, Vancouver Island or the interior, the show really brings together people from all over the region,” she added.

On top of the hundreds of bikes that lined the floor of Tradex in Abbotsford, attendees were entertained by stunt riding teams the Seattle Cossacks and the Vancity Stunters. Professional riding coach Clinton Smout, the Yamaha Riding Academy and two-prize giveaways also helped make this year’s show a memorable one.

Fans and show staff alike are already eagerly anticipating next year’s installment of the Vancouver Motorcycle—the show will be celebrating its 40th anniversary.

ORIGINAL STORY JANUARY 24 – The Vancouver Motorcycle Show is bringing the best and newest motorcycles, scooters, ATV’s and side-by-sides to Tradex in Abbotsford January 24-26. Powersports fans from across BC and the Pacific Northwest have long considered the Vancouver Motorcycle Show to be a can’t-miss event thanks to its reputation of showcasing the industry’s best vehicles, accessories, technology and expertise.

Back again this year to thrill, excite and amaze crowds are the Seattle Cossacks Motorcycle Stunt and Drill Team. This team of riders have brought their spectacular shows to crowds all over the world since 1938 and have been featured on popular network shows like America’s Got Talent, Ripley’s Believe it or Not and Real People. Now into their eighth decade of performances, these feature riders are sure to be a highlight of the Vancouver Motorcycle Show.

FVN spoke with James and Bikers For Autism

Pay parking in effect at Tradex.

Don’t forget parking is always free for motorcycles at the Show.