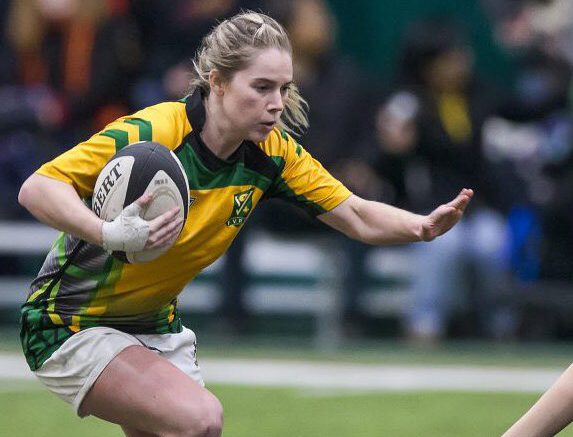 For the second straight Canada West Women’s Rugby Sevens Series tournament, the University of the Fraser Valley came home with a seventh-place finish.

Playing at UBC on the weekend, the Cascades faced a tougher lineup of opponents during pool play than they had at the season-opening tourney held in Edmonton two weeks ago, and when it was all said and done, the UFV club posted a 1-4 record.

The Cascades saw a lot of individual and team growth throughout the event, highlighted by Melissa Jongedijk tying for the tournament scoring lead with 30 points (six tries), and captain Mackenzie Fowler finishing fourth with 28 points (four tries, four converts). The UFV duo sits one-two in the overall CW scoring race – Fowler leading with 66 points over the first two tourneys, and Jongedijk hot on her heels with 60 points.

“We’ve addressed areas where we can improve, both short-term and long-term,” UFV head coach Jen Ross said afterward. “Technical pieces are falling into place – against TWU, our set piece scrums were stronger, and we managed to push them off their own ball three times. We also saw improved communication that led to better attacking play.

“Now we get back to work for the next four weeks and prepare for Victoria. The coaching staff have mapped out what the expectations are, what the vision is, and how we plan to achieve our goals.”

During pool play on Saturday, the Cascades opened with a 46-7 loss to the Alberta Pandas, with Jongedijk scoring the lone UFV try and Cheye Gustafson kicking the convert. They dropped their next game 36-0 to the Lethbridge Pronghorns. In their final game of the day, taking on the Trinity Western Spartans, the Cascades built a 10-5 lead at the half behind tries from Jongedijk and Kira Katan, but the Spartans rallied in the second half to claim a 19-15 win, despite one additional UFV try via Fowler.

On Sunday, the Cascades took on the Calgary Dinos in the consolation semifinals, and dropped a 52-0 decision. They bounced back in the seventh/eighth placing game, blanking the UBC Okanagan Heat 48-0. Jongedijk used her blazing speed to shake loose for four tries, Fowler scored three and booted four converts, and sophomore Amtoj Gill scored the first try of her Cascades career.

Beyond the prolific scoring performances from Fowler and Jongedijk, the Cascades saw a number of young players step up. Katan showed why she was identified at the national U18 level with her fearlessness on defence and pace in attack; Gustafson provided great leadership up front; Holly Boulton had a strong Cascades debut both offensively and defensively; and Gill thrilled the UFV contingent by breaking through for her first try.

Up next for the Cascades is the final stop on the CW Sevens Series, hosted by UVic, Feb. 29-March 1.