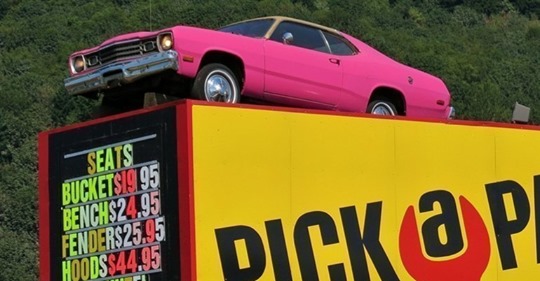 Chilliwack – UPDATE JANUARY 31 – The Pick-A-Part Pink Car is one step closer to immortality. Michael Thibodeau started a Facebook petition to see if the infamous pink car, that was on top of the company office, could be placed in a Chilliwack roundabout (Lickman is a preferred destination). That petition can be found here. He gives credit to his girlfriend Courtney Longstaff , who came up with the idea.

Thibodeau told FVN/chillTV that talks with the car’s owner and Chilliwack Mayor Ken Popove have been fruitful.

While not anywhere near a done deal, the plan would be placing a car on top of an 8 foot pole, with tinted fiberglass windows a la “Hot Wheels”.

That could be plunked into the middle of a roundabout, which would have to be approved by the city art commission. That body oversees art work at Roundabouts.

“I have talked to the owner of the car (John Davy) and he is willing to let the car go to the city, I have contacted the mayor and he has given me insight to submit a plan, I have contacted a sign company and a local restoration company also owned by an artist that build statues all over BC out of metal to come up with some plans, I am meeting with them Saturday. I already had a sit-down with Chris Houlden owner of Prime Signs and we have already drawn up a rough copy of a plan.”

ORIGINAL STORY January 27 – By now, it’s common knowledge from anyone who has bruised knuckles from salvaging parts at Pick-A-Part in Chilliwack knows, the Industrial Way location in Chillliwack is fading off to a memory.

Michael Thibodeau started a Facebook petition to see if the infamous pink car, that was on top of the company office, could be placed in a Chilliwack roundabout. That petition can be found here. He gives credit to his girlfriend Courtney Longstaff , who came up with the idea.

Of course, Council would have to approve of such an “art” piece, but hey, if metal flowers and old farm equipment can make it, there is a chance.

Thibodeau and Cody Chance said on Facebook that: It’s not sold and John laughed when I told him about the petition. Said nobody would want it. Would just need a new paint job.

With pick-a-part closing!
Maybe we should have the iconic Pick-A-Part pink car put in the middle of the new Lickman roundabout.

This town is full of history and this car has been a landmark for decades, our town is full of car enthusiast, car lovers and just people wanting to keep its Historical icons while moving forward to the new city.

I believe there is already power in the middle of the roundabout, we could place the car on a pedestal with led lights, wouldn’t be nearly as expensive as one might think. We have the talent and power to get this done.

Credit deserved for this idea is to my beautiful loving girlfriend courtney Longstaff.

UPDATE – The Roundabout To Cultus Lake – On Schedule For November Completion

DriveSmart BC – Round And Round The Roundabout