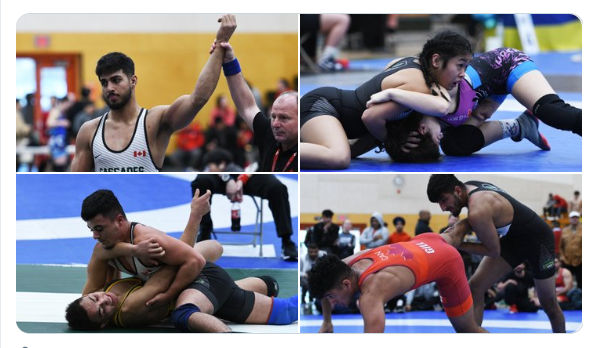 With Calista Espinosa and Jason Bains leading the way, the University of the Fraser Valley wrestling squad turned in an outstanding collective performance at their annual home tournament, the Cascades Classic.

“They all really showed up for this tournament,” coach Gurjot Kooner enthused. “They all either met or exceeded their expectations, and they all wrestled pretty well. There are still some areas we can get better at – we’ll work on those in the coming week and get ready for Canada West.”

Espinosa, a sophomore from Richmond, B.C., earned her first tournament title as a Cascade. She did so in spectacular fashion, winning three of her four matches via pin. In her final match of the round-robin, taking on another undefeated wrestler in Golrokh Nouri of Simon Fraser University, Espinosa fell behind 5-1 before getting Nouri on her back for the pin to clinch the gold.

“She wrestled really well,” Kooner said. “The last couple weeks we’ve been working on a couple specific things . . . before, she would come in on her attacks and kind of stop, but today she was moving every single time. She didn’t give up easy points, and when people took bad shots on her, she’s starting to make them pay.”

Bains rolled through the 100 kg draw in dominant fashion – three of his wins came by technical superiority and one via pin, and none of them lasted very long.

“I don’t think he wrestled a full six-minute match (combined),” Kooner noted. “He’s technically really advanced, and he’s super-strong as well. He’s a really good wrestler. He had a couple of mistakes in his first match where he got scored on, but that first-match rust, you get it out of the way. Otherwise he did well.”

Rahguzar, Atwal and Dhillon each fell in the semifinals to the eventual gold medalist in their weight classes.

Rahguzar bounced back to pin Isaiah Springer of the Alberta Golden Bears in his bronze medal match, Atwal earned a 13-6 decision over Washington’s Chance Goodman to clinch his podium finish, and Dhillon defeated Summit Mann of the Miri Piri Wrestling Club by technical superiority to wrap up his medal.

Up next for the Cascades wrestlers is the Canada West championships, which run Feb. 8-9 in Calgary.

Be the first to comment on "UFV Sports Sunday – Wrestling Gold"