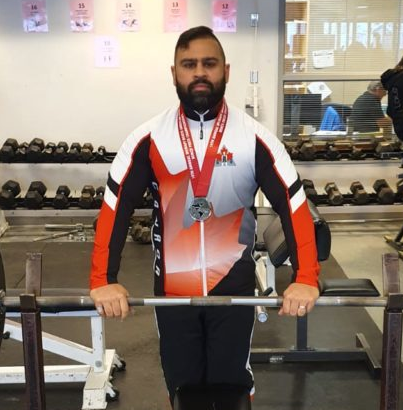 Fraser Valley – At first, Sumeet Sharma  was known as a powerlifter in a sport that quite frankly, doesn’t get the love that it should.

Dedication to the mind and body are keys to the sport. Sharma takes that passion to schools for demonstration. Not just in sports, but in life as well. He is hoping he can make a difference when he speaks and interacts with young people.

In October 2019, Sharma was a gold medal winner for Team Canada at the North American Powerlifting Championships in Panama City.

His future shows include the Canadian Nationals in Winnipeg and from there, could be be going to the Czech Republic in May to represent Canada at the World’s Powerlifting Championships.

Sumeet has been working in BC Corrections for the past six years. He earned his degree in criminology from Kwantlen Polytechnic University.

The now 33 years old recently did a presentation at Prince Margaret High school. On February 10th, Sharma will be at Abby Tradtional high school to Grades 9, 10, 11, and 12.

In his words: Powerlifting is a strength sport that consists of three attempts at maximal weight on any of three lifts: squat, bench press, and deadlift. I pulled off this  gold medal win in bench press with an impressive 370 pounds.

I have  been competing in powerlifting since 2016 and in that time have accumulated an impressive resume. In addition to my  latest win, I won gold in both 2017 and 2018 at the Western Powerlifting Championships. I also placed 4th in powerlifting in the country in 2018.

From these successes I was chosen to represent Canada at the Commonwealth Powerlifting Championship in Newfoundland  earlier this year where I  walked away with silver in Bench Press. I have also started to give back to community by training youth in the lower mainland for free. Also, I have been going to schools all over the lowermaind to give a presentation on powerlifting and dieting.  I m hoping once students hear my story of winning gold for Canada that they won t give up on thier dreams and change their diet habits.