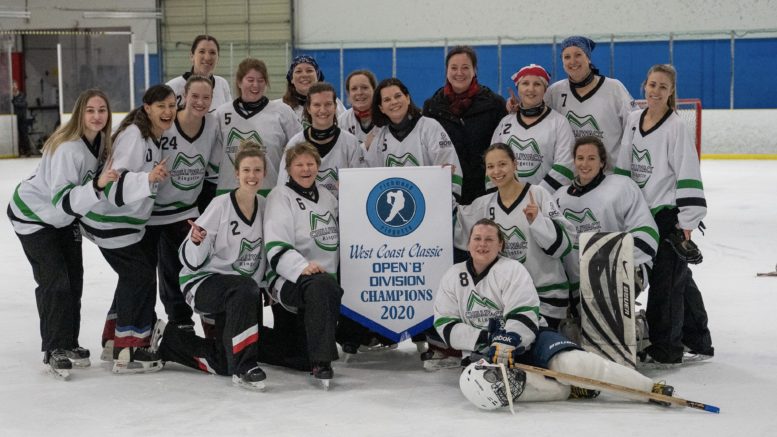 The team advanced directly to the final game after earning the most points in the division during round robin play. Outstanding goaltending from Abbotsford’s Naomi Fishbein and Chilliwack’s Julie Bauer backstopped the team to wins against Kelowna, Westside, Fraser Valley (Langley), and to a tie against Port Coquitlam. Game MVP’s included Christine McPhee, Dyan Kinar, Julie Bauer, and Naomi Fishbein. Leading the scoreboards were Erin Berkowski, Jocelyn Mccomb and Meghan Jansons.

“The tournament win was a true team effort” commented head coach Shannon Bettles. “This group has a special camaraderie— many of the athletes having played together since they were kids. We have an inside joke that we are just ‘lucky’, but really the team is composed of skilled athletes with many years of ringette experience at the provincial and national level”.

Captain Laurie Benton remarked that the best part of the win was having some of Chilliwack’s U10, U12 and U14 players and families in attendance cheering the team on. “The next generation of ringette players are watching their coaches play and opening their imaginations to the lifelong sport possibilities and friendships ringette can bring. Now we just have to find a spot to hang our first banner at Sardis Sports Complex”.

Formed three years ago, the Chilliwack 18+ is composed of 19 players over the age of 18 from around the Fraser Valley representing communities of Abbotsford, Chilliwack, Mission, and Langley. Begun in 2016, the Chilliwack Ringette Association is competing in its fourth season. There are now five teams in the association representing over 80 athletes, coaches and officials.