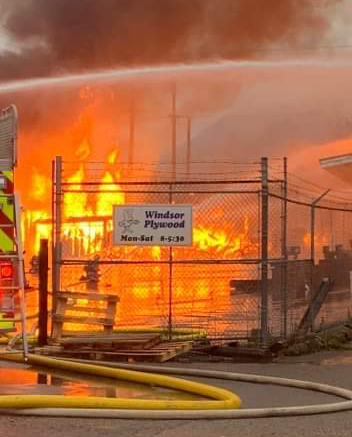 Chilliwack (Shaun Glazier) – Just after 2 PM on Friday afternoon, fire erupted in the back lot of Chilliwack’s Windsor Plywood (Vedder and Alder). Chilliwack Fire crews started their attack at the back but the fire quickly engulfed the main building.

Fortunately no one was hurt but being so close to Christmas, no one will have a job to go to after the holidays.

There were concerns for a new apartment building next door and fire crews were making sure there is no damage there, however there was extensive damage to Canadian Liquidation. The fire was also close to the office of Chilliwack Hospice Society and MLA Laurie Throness as well as a Remax office.

Chilliwack Fire stated is a later media release: A customer alerted staff to the fire that had started in a door and lumber storage area of the business, staff evacuated customers and themselves from the building and called 911. The fire spread quickly and aggressively from the door and lumber storage area to the main store area.Firefighters responded from Halls 1,3, 4and 6, and on arrival, reported heavy fire and a thick black smoke column of smoke rising from the lumber supply and door manufacturing business, and spreading to the adjoining liquidation retail store. The first arriving officer assumed command, called for a 2nd alarm and set up a defensive attack to confine the fire to the building of origin.Firefighters contained the fire to the building of origin, which sustained heavy fire damage resulting in structural failure of walls and the roof system. An excavator was brought in to systematically open up the building to enable firefighters to safely gain access to extinguish the fire.

No one was hurt and the cause is under investigation.

Church Fire On McNaught In Chilliwack