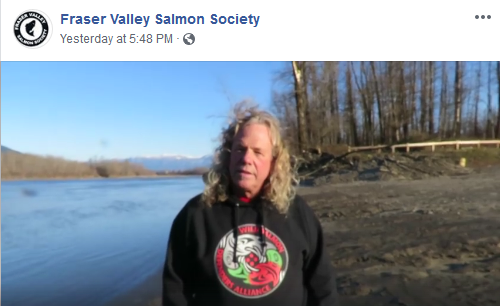 Big Bar/Lillooet – Dean Werk, Chris Gadsden and others from the Fraser Valley Salmon Society are raising alarm bells over this summers rock slide that blocked the Fraser River at Big Bar. The rock slide interfered with salmon spawning runs. At first, there was a hectic pace for workers to transport fish from one side of the slide to the other. The work was literally by hand and into helicopters.

It may not be enough.

CBC, Global and Canadian Press are reporting that scientists are fearing the worst case scenario from the slide. Some Fraser River salmon populations could be wiped out completely. That would include Early Stuart sockeye and the Mid-Fraser and Upper Fraser Spring 1.3 chinook.

Fisheries and Oceans (DFO) stated in an October 16 presentation that Federal government scientists told the Pacific Salmon Commission there is a “meaningful chance of extinction” for three salmon runs after the Big Bar landslide.

Past efforts to try an environmentally friendly way to move the salmon may have to make way to outright blasting of the rock to clear the waterway.

Public Services and Procurement Canada, on behalf of the Department of Fisheries and Oceans, issued a request for information seeking input from the private sector and other experts to re-establish a natural fish passage at the site of the slide. That request runs until December 6. The question being, would Ottawa spend that kind of money? Would that include explosives to move the rock?