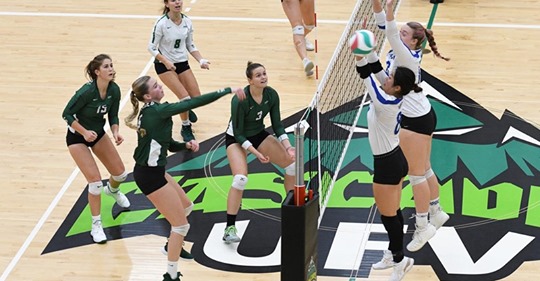 The Capilano Blues knocked off the UFV Cascades in PACWEST women’s volleyball action on Friday evening, prevailing in four sets.

“I just feel like we made some mistakes at critical points, but we also did some really good things at critical points, too,” Cascades head coach Janelle Rozema said. “It was just at the wrong time in the match. Credit to Capilano – they played incredible defence, and I think they made us better tonight. The vibe post-match in our lock room was a real spirit of determination. I think everyone is ready to get back in the gym on Monday and get better at what we need to get better at.”

In a tightly contested first set, the Cascades prevailed 25-23, getting a key block from Sedona Arabsky and a kill from Amanda Matsui to clinch it.

The Blues bounced back to take the second, pulling away in the middle stages and getting back-to-back aces from Eva Nagata to close it out 25-19.

Left side Ashley Huberts came off the bench in the third set to give the Cascades a spark, but the Blues maintained their momentum and took it 25-20.

UFV led by as many as four points in the fourth set (16-12), with middle Lauren Poirier providing an imposing presence at the net. But every time the Cascades appeared poised to pull away, but Blues made a clutch play on defence to gain new life. Their defence was particularly dialed in as the set moved past the 20-point plateau, setting the table for the Blues to surge ahead to close out the match 25-23.

Matsui’s eight kills were a team high for the Cascades, and Huberts notched six kills off the bench. Chelsea Kidd was an efficient presence on the right side, posting four kills with a .429 hitting percentage, keeping the Blues off-balance with a variety of shots.

Meghan Koven’s 16 kills were a game-high for Capilano, and Nagata chipped in with eight kills.

A promising start gave way to a disappointing finish for the University of the Fraser Valley men’s volleyball team, as they dropped a four-set decision on the road to the Capilano Blues on Saturday.

“Better start, but we couldn’t respond to their push-back,” UFV head coach Nathan Bennett said afterward. “Some good moments from our guys, but we need to be more consistent throughout the match.”

Neither team was able to build more than a three-point lead at any stage of the closely contested opening set, but it was the Cascades leading most of the way with Landon Uy pacing the offence. A series of late errors by the Blues, alongside a key kill from Caleb Kastelein, allowed the visitors to seal a 25-22 win.

The Blues, though, would seize the momentum, racing out to a 5-1 lead in the second set as the Cascades struggled with errors of their own. Capilano would lead by as many as nine points (17-8) and cruised from there.

UFV was competitive in the third, but the Blues took control in the middle portion of the set and fended off the Cascades in the late stages to seal it 25-21.

The fourth set was all Capilano – back-to-back aces from Simon Friesen staked the Blues to a 14-8 lead, and they kept their foot on the gas to wrap up the match.

Rafael Hilario led the Blues with 15 kills, and Ben Friesen added 10 for the hosts.