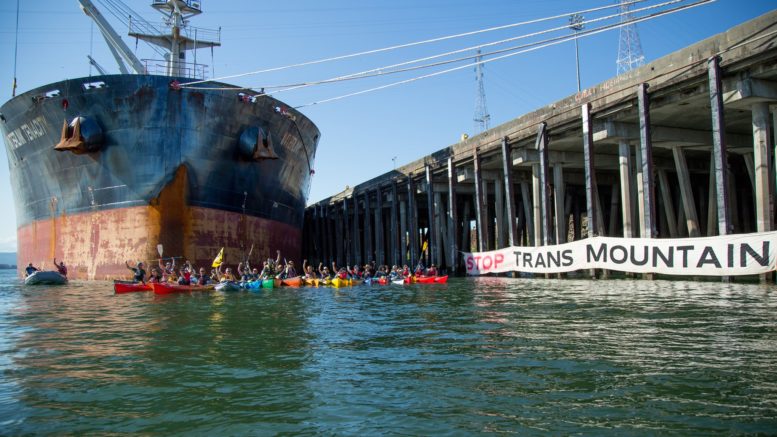 Vancouver, WA/ Vancouver BC— On Tuesday, Community members from Oregon and Washington shut down part of the Port of Vancouver to block a shipment of pipeline that is destined for the Trans Mountain Pipeline Expansion (TMX) project in Canada that would run from Edmonton to Vancouver, BC

Five climbers locked themselves to the dock where the shipment is to be off-loaded in order to prevent the pipeline pipes from making it to their final destination in Vancouver, B.C. They are supported by dozens of kayakers and other boaters who are rallying to tell the Port of Vancouver, Governor Inslee, and Prime Minister Trudeau to stop the fossil fuel project that is jeopardizing a livable future for everyone on this planet.

A member of the Tsleil-Waututh Nation and Tulalip Tribes, Cedar George-Parker, said, “This is not just a Canadian problem, but an American problem, too. We need people in the U.S. to stand in solidarity and take action to stop this pipeline. The border will not divide us.”

An activist with the Mosquito Fleet, Sam Suarez, said, “I’m here because, if constructed, the Trans Mountain Expansion would transport an additional 590,000 barrels of toxic, heavy crude every day from the Alberta Tar Sands to the shores of British Columbia. This boost in export shipments would increase oil tankers in the Salish Sea 700%, threaten endangered Orca whales, and violate Indigenous rights. The emissions from such an expansion of tar sands oil production could spell game-over for our climate.”

This is the third in a series of actions targeting the Port of Vancouver, WA for its role in transporting fossil fuel infrastructure.

In early September, activists broke the news that pipe for the TMX project’s construction is being imported by ship to the Port of Vancouver, WA and then blockaded a rail line at the Port to prevent the pipe from being transported to British Columbia.