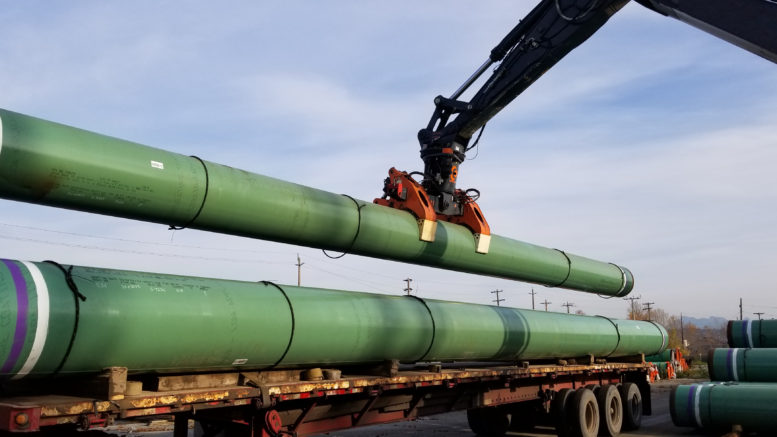 Calgary – To no one’s surprise, Trans Mountaqin is pleased by the announcement that the twinning of the pipeline will move forward, at least for now. It does not appear that any government road blocks will again come up. First Nations and other protesters will have something to say about that. Prime Minister Trudeau hinted in his comments that First Nations will have a stake at the entire project from an ownership angle. That could be “anywhere between 25% to 100%”. Trudeau also stated that he envisions that building will start during this construction season.

From Trans Mountain– Today’s Government of Canada approval of the Trans Mountain Expansion Project (TMEP) is an endorsement that the Project is in the best interest of Canadians and triggers the regulatory and commercial steps that now can be completed to get shovels in the ground.

“Today’s announcement confirms the value of this Project to Canada’s economic future. It is also a vote of confidence in the ability of a project of this magnitude to succeed. This is a major milestone, not only for us, but more importantly for the shippers, communities, workers, local businesses and Indigenous peoples who have been involved in the development of the Project and are waiting to share in its success,” says Ian Anderson, President and CEO of Trans Mountain Corporation. “Today is the culmination of a lengthy and thorough review that considered the thousands of hours of environmental and technical studies, scientific evidence and meaningful engagement that were part of the comprehensive assessment.”

In the 10 months since the Federal Court of Appeal decision halted Project progress in August 2018, TMEP and its partners have been continuing to advance necessary design and planning work. This work will help move the Project forward to support Canada’s energy resource development, bringing thousands of jobs and significant financial opportunities to communities at a time when our economy needs both.

Next steps following today’s approval include the granting of the Project’s Certificate of Public Convenience and Necessity or “CPCN” by the National Energy Board (NEB).  The Company also expects an NEB process to reinstate the record from the previous regulatory proceeding and Trans Mountain will request that the Project be brought back to the same state of construction readiness that it was prior to the Federal Court of Appeal decision.

Trans Mountain has always been confident that the Project has and will meet every standard, every regulation, and every test of environmental protection and stewardship.

The Progressive Contractors Association of Canada is obviously thrilled that this is happening:

The Progressive Contractors Association of Canada (PCA), whose member companies will be major builders of the Trans Mountain Pipeline Expansion project along with thousands of Alberta and B.C. construction workers,is urging the federal government to ensure nothing else stands in the way of this critically importantproject. “We’ll believe this project is moving forward when the shovels are finally in the ground,” said Paul de Jong, President of the Progressive Contractors Association of Canada (PCA). “While today’s decision is the right one, it’s far from a ringing endorsement when the government is working so hard to kill major resource projects through legislation and regulations designed to make energy development less likely in the future.” Bill C-69 will bog down major projects and drive up costs and uncertainty. Bill C-48 limits Canada’s export capacityby banning oil tankers carrying more than 12,500 metric tonnes of crude oil from stopping at ports along B.C.’s north coast. Both bills are likely to be passed into legislation this week. “We’re urging the federal Liberals not to use Trans Mountain as a pawn in their re-election bid this fall,” added de Jong.

Surrey Board of Trade went on record supporting the decision , as the pipeline will go through their city:

“We have some semblance of economic certainty again in Canada,” stated Anita Huberman, CEO of the Surrey Board of Trade. “International investment confidence in Canada has become a concern as a result of this prolonged delay.”

“Trans Mountain needs to re-apply for permits at all levels of government, and have them approved. We hope this process is expedited so that the pipeline can begin construction in 2019.”

Pipelines are crucial to Canada’s economy. They generate investment in communities, research and development, create jobs, and spur growth in all sectors of an economy.

“Moving crude oil by rail through suburbs is far more hazardous than using state-of-the art technology in pipelines. A portion of the new construction of the Trans Mountain Pipeline will go through Surrey.”

“The Surrey Board of Trade Environment and Infrastructure Team has extensively reviewed this project and has actively participated in the discussions related to the focus on environmental protections such as the binding conditions by the National Energy Board as well as the investments in the Ocean Protection Plan which serve to address environmental and other concerns related to the project.”

Question – Have You Lost Work Over Trans Mountain Decision?