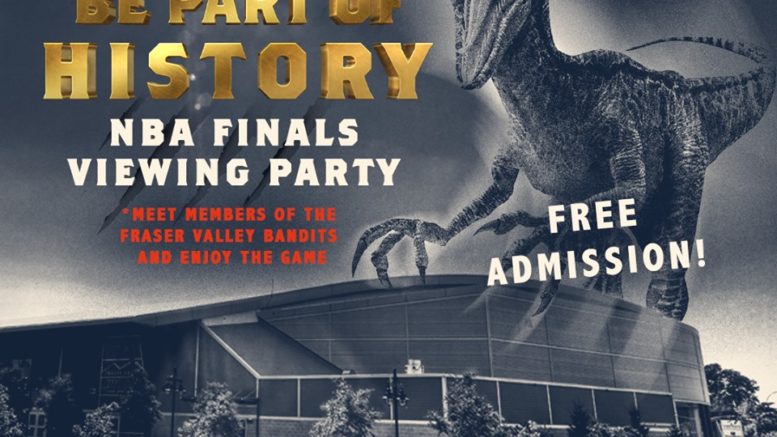 Abbotsford – The Fraser Valley Bandits, Tourism Abbotsford, the City of Abbotsford and Abbotsford Centre announced Sunday that they will be hosting a free public Viewing Party for Game 5 of the NBA Finals between the Toronto Raptors and Golden State Warriors at Abbotsford Centre on Monday, June 10.

Tickets are required to enter Abbotsford Centre. Free admission tickets can be registered at this link:

“This is a historic opportunity for the City of Abbotsford to work with the Fraser Valley Bandits to bring fans from across the Fraser Valley and Lower Mainland to support what has been an inspirational regular season and playoff run by the Toronto Raptors,” said Chris Blanchette, Tourism Abbotsford’s Destination Sales and Marketing Manager.

“Abbotsford is excited to welcome fans for this free admission event and to unite as one in support of the Toronto Raptors in their pursuit of the franchise’s first NBA championship. This will be a special chance for people to gather together to showcase British Columbia’s passion for the sport of basketball, the Raptors and to celebrate what is truly one of Canada’s most diverse sports.”

Abbotsford Centre’s doors are set to open at 5:30 p.m. in advance of a 6 p.m. broadcast. Fans are invited to come watch the game from the comfort of the seats in the venue. Concessions will be available for purchase as fans from across the province gather to cheer on the Raptors in a professional basketball atmosphere.

“The Bandits are extremely excited to work with the City of Abbotsford to bring fans together in support of a movement that has swept our country,” said Bandits President Lee Genier.

In support of the event, members of the Bandits will be on hand to help cheer on the Raptors and to meet and interact with fans throughout the broadcast.