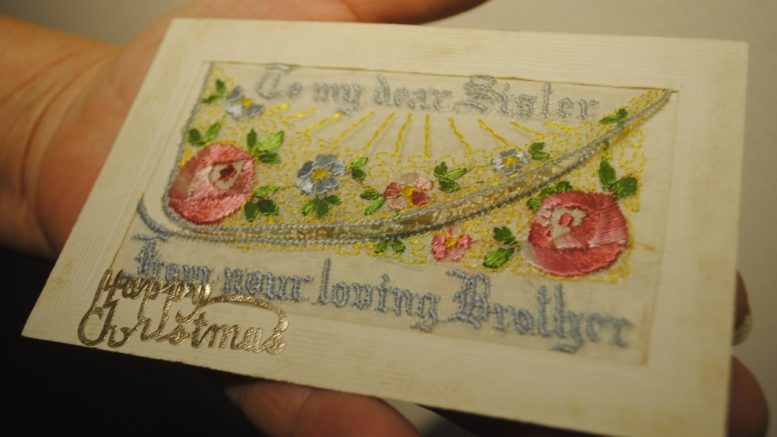 Langley – The Langley Centennial Museum’s most recent acquisition – a written snapshot of life during the First World War – arrived through the hard work of the BC Genealogical Society (BCGS).

Janice Kidwell, a volunteer and researcher with the BCGS, contacted the Museum after receiving a postcard from a woman in England who had found it in an antique shop fifteen years earlier.

The postcard had been written by Sapper “Jack” Clement Selwyn Finlaison of the 4th Battalion’s Canadian Railway Troops and sent to his sister in England during the First World War. Born in Victoria in 1885, Finlaison enlisted in Vancouver, listing his trade as “merchant.”  Sometime after the war, he settled in Murrayville. In 1928, he began managing the new Mac and Mac Feed Store, which was located on Yale Road between the Sharon Church and the Murrayville Garage.

After realizing Finlaison had a tie to Langley, Kidwell and BCGS President Eunice Robinson visited the museum in April to donate the postcard, and Curator Kobi Christian helped connect the dots.

She noted that, although the postcard is not dated, it was likely written in late 1917, and the postcard’s silk front features fine embroidery. “Postcards like this were popular to send home, and some, like the one donated to the museum, had a small delicate flap in the silk that formed a pocket for a little message or special greeting,” Christian said. “This postcard featured a tiny card inside with a small illustration and the text, ‘Love to all at home,’ and Finlaison signed it ‘Jack.’”

On the postcard, Finlaison wrote from “Somewhere in France” that, “We are on our way up to the line, so I suppose that tomorrow we will be doing our bit. Feeling fine so far.”

The postcard will soon be added to the museum’s collection, at 9135 King Street in Fort Langley, and will be viewable on its searchable online database at https://museum.tol.ca/museum/Portal/explore.aspx.

After returning from the war and becoming manager of the shop in Murrayville, Finlaison married Blanche Blair in Milner. Blanche was the daughter of Eliza and George Irvine Blair and sister of late Township Mayor W.C. Blair.  When Mac and Mac pulled out of the feed store in the late 1930s, Jack and Blanche Finlaison took it over themselves and ran it until the 1940s. The couple later moved to White Rock. Jack passed away in 1965 at the age of 79.