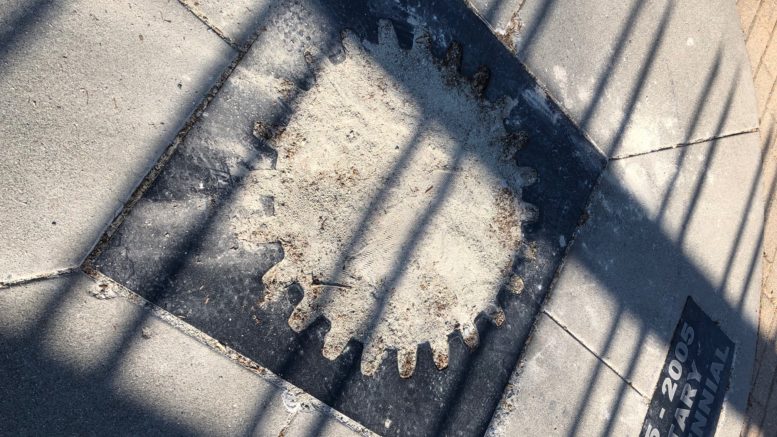 Chilliwack – Breathe Easy Chilliwack, It wasn’t a theft. the City had it all along. Chilliwack Rotary Club posted to Facebook:

Good news! The Rotary Wheel that went missing at Chilliwack Central Community Park has been found safe and mostly sound.

Thanks to some sleuthing by our ever vigilant partners at the City of Chilliwack Parks department, we learned the wheel had been removed about 3 months ago due to a possible tripping hazard – a small piece of a cog had been bent. The metal and granite wheel had been cemented in to place, and the parks people took about three hours to try to remove it safely.

We’re meeting with Parks staff later this week, and we’ll try to determine how best to replace the wheel in the park. We’ll also look at ways we can communicate better with each other if something similar happens again.

The other irony is that the plaque was removed some three months ago, but it was only noticed missing over the past few days. Then it took off on social media.

ORIGINAL STORY – Vandalism and property theft in the Downtown Core is common place. It’s a fact of life when you live and work in the “hood”. However there are times when something happens and you just have to shake your head. Chilliwack Rotary have a bronze plaque at the Victoria and Mill Street entrance to Central Community Park. That’s where the annual Party In the Park and Farmers Market are held.

Vandals might have thought they could get some money for the metal, or perhaps they wanted the plaque for their man cave. Either way, it’s been stolen and Rotary would like to have it back.

Rotarian Michael Berger told FVN that he wasn’t sure on the story behind the theft. If you have any info, contact Chilliwack Rotary or RCMP.