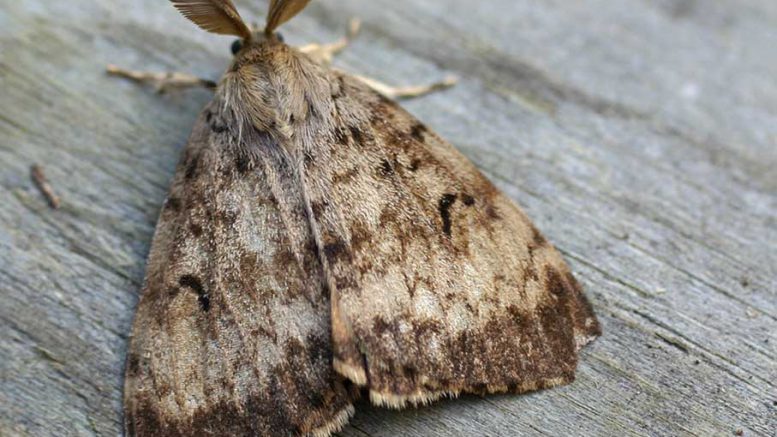 Surrey/Victoria – It’s that time of the year for conspiracy theorists saying that this is all a government plan.

The first aerial-spraying treatment to eradicate invasive gypsy moths from 62 hectares of residential and municipal park land in North Surrey will occur Wednesday, May 1, weather permitting.

The spraying will occur close to Highway 1, near the Port Mann Bridge.

Three separate sets of treatments are required this spring. Spraying will be carried out by a fixed-wing aircraft. It will start shortly after sunrise (5:20 a.m.) and be completed by 7:30 a.m. daily.

Unless delayed by poor weather, each treatment is expected to take one morning to apply. The ministry is aiming to have the spraying completed by mid-June.

The aerial spraying aims to eradicate a growing population of gypsy moths and minimize the risks they pose to forests, farms, orchards and trees. The Ministry of Forests, Lands, Natural Resource Operations and Rural Development has been issued a pesticide-use permit to aerial spray and is planning up to four applications of Foray 48B over the two-month time period to control the moth.

Foray 48B is used in organic farming and contains bacillus thuringiensis var kurstaki (Btk). Btk has been approved for the control of gypsy moth larvae in Canada since 1961.

Btk is naturally present in urban, forest and agricultural soils throughout the province. It does not harm humans, mammals, birds, fish, plants, reptiles, amphibians, bees or other insects and only affects caterpillars after they have ingested it.

Trapping and monitoring results over the past several years show clear evidence a gypsy moth population is establishing in the proposed treatment area close to Highway 1, near the Port Mann Bridge in North Surrey.