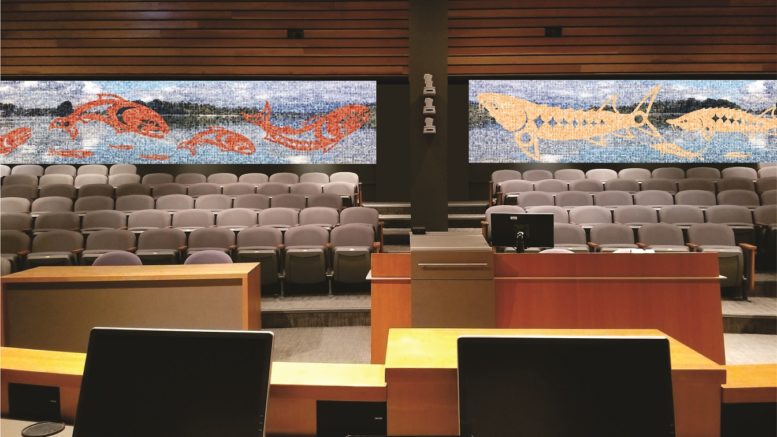 stɑl̓əw̓, which features 1,1000 photos of community members and depicts the Fraser River, salmon, and sturgeon, has been installed in the Township of Langley’s Fraser River Presentation Theatre as a Canada 150 legacy project.

Langley – A unique work of art that has literally captured the community has been created by a talented Indigenous artist and installed in a public gathering place for everyone to enjoy.

The mosaic mural, called stɑl̓əw̓, meaning “big river,” was made by artist q̓ʷɑt̓ic̓ɑ (Phyllis Atkins) of the Kwantlen First Nation as a legacy project to recognize Canada’s 150th birthday in 2017.

The artwork has been installed in the Township of Langley Civic Facility’s Fraser River Presentation Theatre, and was unveiled during a Township Council meeting on Monday, April 15, with the artist and members of the Kwantlen First Nation in attendance.

“The Township of Langley – which is on the traditional territories of the Kwantlen, Katzie, Semiahmoo and Matsqui First Nations –  took on this Community of Communities photo mosaic initiative to bring together members of our six urban communities, the rural area, and First Nations, to celebrate our diversity, heritage, and inclusivity,” said Township of Langley Mayor Jack Froese.

Throughout 2017, photo booths were set up at numerous community events around the Township to capture portraits of residents. Atkins then used more than 1,1000 photos to create a two-panel piece that depicts the Fraser River, salmon and sturgeon, which reflect the bounty, beauty, strength, and heritage in the area now known as Langley.

The project was funded by the Government of Canada and the Department of Canadian Heritage through a grant from the Canada 150 Fund.

“The Government of Canada is dedicated to our nation’s past, celebrating who we are, and building lasting legacies which lead into the future,” said John Aldag, Member of Parliament for the Cloverdale – Langley City riding, which includes a portion of the Township. “As such, the Canadian Government and the Department of Canadian Heritage created the Canada 150 Fund to support projects that help to define this legacy.”

“Preservation of Canadian heritage is also near and dear to me personally,” Aldag said, “and I was proud to support the Township of Langley’s application for funding of the Legacy Project Community of Communities Photo Mosaic.”

The Township of Langley is grateful to everyone who attended the local events and agreed to have their photographs taken for the community project.

Be the first to comment on "People, Place, and History Pictured in Langley Community Mural"