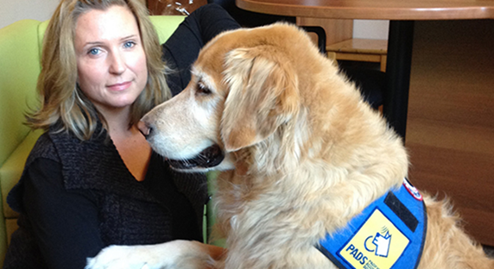 Abbotsford – Mac the canine counsellor at the University of the Fraser Valley is calling it a career and retiring after 13 years of helping students cope with post-secondary stress.

The 15 year-old golden retriever is the Pacific Assistance Dog Society’s (PADS) longest serving member and has worked alongside registered clinical counsellor Dawn Holt in the UFV counselling department for nearly all of her career.

“Mac is a huge part of what I do at UFV. Together we help students with mental health concerns and university stress. His empathy and ability to detect sadness or anxiety and then help calm clients is almost magical,” explains Holt. “His presence can break down barriers and this helps begin our process.”

He has helped students during exam time, calmed those in crisis, consoled police officers during funerals, and helped wild fire victims. With Holt he has worked with students and others in counselling sessions, critical incidents, in classrooms, hallways, offices, and at hospices.

Over the course of his career, the canine counsellor has made 1792 drop-in visits, participated in 6187 counselling sessions, and appeared in over 12,000 meet and greets in gyms, arenas, and events. He has been a key part of 635 intensive therapy sessions, and 12 critical incident and disaster relief deployments.

“I’m just so grateful he has been able to work for so long – and still loves it! He beats me to the car for the commute most mornings,” says Holt.

He has been awarded the BC Provincial Above and Beyond certificate for selflessness in service for his deployment to assist BC wildfire victims in 2017. He has provided support for community and police agencies after critical incidents and facilitated mental health workshops.

“It is extraordinary the impact Mac and Dawn have had as a team,” said Tara Doherty, Marketing & Communication Manager, Pacific Assistance Dogs Society. “PADS is so proud of the work they have done and when you look at the longevity of his career and the number of people he has helped, his impact is simply unprecedented. Dawn and Mac truly are a match made in heaven and we credit Dawn for his long service. She makes work so much fun for Mac and she has made his physical and emotional needs one of her top priorities.”

Mac now sheds the blue and yellow PADS vest and this allows him to really start enjoying his “golden” years with fewer responsibilities and rules.

“He knows he doesn’t have to be on his absolute best behaviour when he’s not wearing the PADS vest, so now he’s doing some things he would normally only do when ‘off-duty’; he is already starting to relax and enjoy his retirement,” Holt says.

Mac will continue to come to UFV, but now as a volunteer, rather than as a registered professional. For Mac it’s likely going to be business as usual as he provides a quiet, calming, and helping presence for those in need of unconditional support.

·       First registered therapy dog in the world to work with a counsellor as part of support services offered to university students.

·       Awarded the Provincial “Above and Beyond” certificate for selflessness in service for his deployment assisting BC wildfire victims in 2017.

·       He has participated in multiple debriefings and support meetings in the UFV community after student or faculty deaths.